The BBC has the actual video of Centanni and Wiig, HERE

The terrorists are demanding “All Muslim prisoners to be released from US confinement.”
(I wouldn’t recommend a sudden conversion to Islam if you’re sitting in lockdown.) 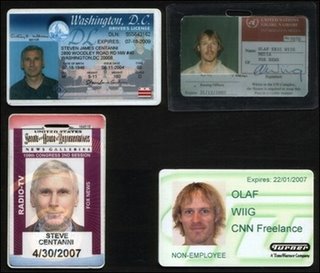 A picture taken of a television screen showing news from the Palestinian Ramattan News Agency with identification cards of US television network Fox News journalist Steve Centanni and freelance cameraman, New Zealander Olaf Wiig who were kidnapped from the Gaza Strip on August 14. A previously unknown Palestinian group in the Gaza Strip has claimed last week’s kidnapping of the two journalists, demanding that all Muslim prisoners in the United States be released within 72 hours.(AFP/Mohammed Abed)

The first news from the kidnappers holding Steve Centanni and Olag Wiig was released by Aljazeera today:

In the video, American correspondent Steve Centanni, 60, and cameraman Olaf Wiig, 36, of New Zealand, made statements about their condition and appealed for help in winning their release.

The footage, first released in Gaza to the Arab TV station Al Jazeera via the Palestinian news agency Ramattan, was the first sign of the journalists since they were kidnapped Aug. 14 from their news van in Gaza City.

The statement issued by the Holy Jihad Brigades — the first by a Palestinian group in Gaza that made demands on a foreign country other than Israel — demanded the release of Muslim prisoners in U.S. jails be released within three days in exchange for Centanni and Wiig. The group did not say what would happen if the deadline passed unanswered.

“We are going to exchange the Muslim female and male prisoners in American jails in return for the prisoners that we have. We are going to give you 72 hours, beginning midnight tonight, to take your decision,” the statement said. “If you implement and meet our condition, we will fulfill our promise. If not, wait, and we are going to wait with you.”

AllahPundit is all over the news of this released tape by the “Holy Jihad Brigades.”

Via Instapundit, Jules Crittenden explains why this terrorism news against FOX journalists isn’t really news.
Michelle Malkin has a roundup.
Musing Minds has more on the kidnapping.
The Jawa Report makes reference to several ominous signs that this may be an Al Qaeda kidnapping- including: the 72 hour threat, the name of the group, etc.

I’m with Rusty- this doesn’t look good- more reasons:
– They ask for female prisoners
– They are just now talking after a week since the reporters disappeared
– They were not immediately released like similar kidnappings in Gaza.

Meanwhile, Jill Carroll today says she felt “like an animal in a cage” by her kidnappers.

Update: (August 24, 2006) There is more talk about an Al Qaeda connection this morning. Not good.