“I saw this trial as a way to once again bring up to the public, in a nonviolent way, the atrocities that are going on in Iraq. I thought this was another opportunity to make the case against the war in another public forum. I am glad that I took that opportunity.”

However, the judge disagreed saying this was not a case of civil disobedience, but one of vandalism. 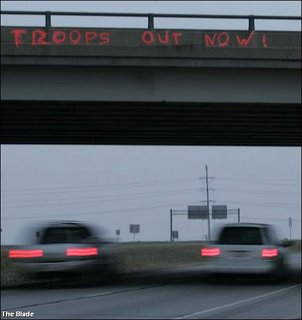 55 year old, Mike Ferner and his brother, John, were arrested after anti-war slogans were spray-painted on two area bridge overpasses.
(THE BLADE)

Peace activist and former mayoral candidate is convicted in 20 minutes for vandalism:

A jury took less than 20 minutes to find Ferner guilty of felony vandalism and possession of criminal tools for spray painting “Troops Out Now!” on the Central Avenue overpass on I-475/U.S. 23 in Sylvania Township on New Year’s Day.

A Toledo councilman from 1989 to 1993 and unsuccessful mayoral candidate in 1993, he is looking at possible one-year prison sentences for each offense and fines up to $7,500.

Ferner had the opportunity to resolve the case months ago by pleading to a misdemeanor charge in Sylvania Municipal Court. He said last night that he didn’t regret going to trial and was willing to accept any punishment that Judge Wittenberg would impose.

This is not the first time for the Ferner. In March he was arrested in Washington DC:

Ed Kinane, from Syracuse, and I stood before Milliken, charged with disrupting a Congressional Committee hearing the evening of March 8 when Ed silently held up a banner that read, “Stop the Killing,” and I started reading the names of U.S. soldiers and Iraqis killed in the war. Capitol Police hustled us out and arrested us, but not before we interjected several moments of reality into the committee’s discussion of $67,000,000,000 more for the war.

Ferner went to Iraq before the War in Iraq to act as human shield. 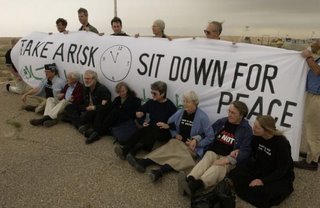 During the last week of February, 2003, just three weeks before the U.S. invasion of Iraq, members of Voices in the Wilderness traveled from Baghdad to Iraq’s border with Kuwait, south of Basrah. Here they sit across the narrow blacktop road facing the Kuwait border, urging the U.S. peace movement to organize sit-downs to keep Bush from going to war. (Ferner in hat- MikeFerner.org)