Judge Taylor Diggs is the Secretary and a trustee for CFSEM.

* The foundation made a “recent grant” of $45,000 over two years to the ACLU of Michigan.
* The Foundation’s trustees make all funding decisions at meetings held on a quarterly basis.
* Judge Taylor Diggs also ruled last week on the government’s warrantless wiretapping program.
* The case was brought before her court by the ACLU.
* Judge Taylor Diggs sided with the ACLU in the case.

The Jimmy Carter appointee, Judge Anna Diggs Taylor may be in serious trouble.
(It has all the signs of a Rovian Conspiracy!) 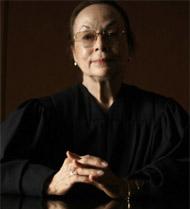 According to the CFSEM website, “The Foundation’s trustees make all funding decisions at meetings held on a quarterly basis.”

“This potential conflict of interest merits serious investigation,” said Judicial Watch President Tom Fitton. “If Judge Diggs Taylor failed to disclose this link to a plaintiff in a case before her court, it would certainly call into question her judgment.”

AllahPundit explains what this new information means and has the press release from Judicial Watch.
STACLU has video of O’Reilly’s discussion of Diggs Taylor’s hurtful ruling and more Diggs Taylor backlash.

Update: Via The Jawa Report, the Michigan ACLU does not think it is a big deal.