A FOX News Opinion poll released on August 10, showed that nearly one third of Democrats believe that the media is slanting the news in favor of Israel.

This is interesting considering the fact that there have been so many instances of faked and staged photos coming from Lebanon in the last couple of weeks that clearly favor Hezbollah:

Overall, do you think most news coverage of the conflict in the Middle East
has favored Hezbollah, favored Israel or has presented both sides?
Hezbollah, Israel, Both, (Don’t know):

32% of democrats say the news is favorable to Israel, while 26% of Republicans say that the coverage favors Hezbollah.

It’s hard to imagine that with the massive amount of attention the media and Leftists gave to Qana that you would get these results.

It is also amazing that nearly 1/3 of democrats sympathize with the Hezbollah terrorists.

Another, even more shocking(?) poll of Leftists was the one taken at the New Left‘s leading blog, The Daily Kos, where 44% of readers initially said that “Israel was clearly a curse on the world.”
Via Charles Johnson

Isn’t the Democratic Party the party of choice for Jewish Americans?

And, here’s another one… Why did Jews not overwhelmingly support Joe Lieberman in his primary race?
Via Newsweek…

I cannot understand why Joe’s percentage of the Jewish vote was not in the high 90s instead of the 54-57 percent range.

The Moderate Voice has more on this puzzle.

And, there’s more shocking Leftist-Jew hating news… “Germany was rocked by the revelations last night that Günter Grass, its greatest living author and doyen of the Left, was a member of Hitler’s elite Waffen-SS.”

But… despite the constant pounding from the mainstream media and liberal blogs, it looks like Mel Gibson career may have its own miraculous resurrection.

80% of those questioned in a FOX News Opinion poll said that it would make no difference on whether they would go see another Mel Gibson movie.

Asked…
Which do you think is worse about the Mel Gibson incident?

So, there may be some hope for Mad Max, yet.

– Also… Disney announced that it would go ahead with the distribution of Mel Gibson’s film today.

Maybe this explains it… 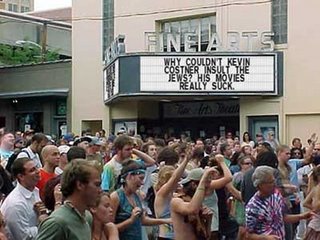 Neander News has this and more.