“Realizing the gravity of the situation our country is undergoing, we pledge in front of God and the Iraqi people to be sincere and serious in preserving the unity of our country.”

Reuters has a clip of the Unity Summit of tribal leaders in its latest Iraq update, HERE.

Over 90% of Iraqis support a Unity government and continue to be upbeat about their future! 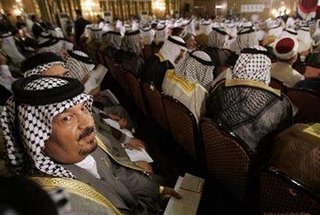 Al-Maliki won endorsement of his program for bridging religious, ethnic and political divisions at a national conference of tribal chiefs. A representative of the chiefs read their agreement on live television, calling it a “pact of honor.”

“Realizing the gravity of the situation our country is undergoing, we pledge in front of God and the Iraqi people to be sincere and serious in preserving the unity of our country,” said the agreement signed by tribal leaders and sheiks.

The chiefs also pledged to “work hard to stop the bloodletting and … sectarian killings that have nothing to do with our values.”

The endorsement was a boost to al-Maliki because tribal ties wield considerable influence in Iraqi society, especially among rural people for whom clan bonds are vital. 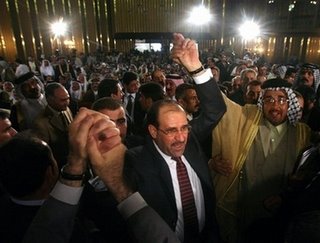 Also this weekend, kidnappers released a Sunni Parliamentarian,Taiseer Najah al- Mashhadani, in what is viewes as a gift of reconciliation after they held her for two months:

As tribal chieftains dressed in traditional robes met in a hotel in the capital, a Sunni Arab legislator was freed nearly two months after her kidnapping sparked a political furore.

A member of her Iraqi Islamic Party said Taiseer Najah al- Mashhadani was released after her captors made contact with Sunni Vice President Tareq al-Hashemi. Some Sunni leaders had accused Shi’ite Muslim militias of being behind the abduction.

Mohammed at Iraq the Model shares his thoughts on the current situation and what can be done to ensure progress.
Hat Tip Larwyn