Ahmad Batebi, one of Iran’s most famous political activists was re-arrested in Tehran late last month. His family was told this week that he will be held at Evin Prison for 9 more years. 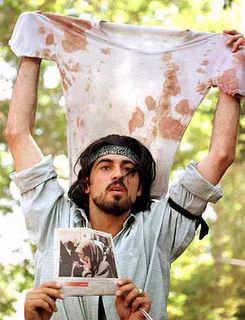 Ahmad became famous during the 1999 Iranian student uprisings when his picture appeared on the cover of the British Economist and was later jailed and persecuted by the Iranian mullahs.

The t-shirt Ahmad was holding in this famous picture belonged to a colleague of Batebi’s, a victim of government-backed violence against the peaceful protesters.

According to the latest news reports on the status of student leader, Ahmad Batebi, on Thursday, August 2nd, at 10 a.m., five days after his re-arrest, Batebi’s interrogator contacted Batebi’s father and after threatening him, handed the phone to Ahmad himself, to speak to his father. The interrogator specified that Ahmad is now being detained and if new charges are not leveled against him, he will only have to complete the nine years remaining on his original prison sentence in Evin prison.

The interrogator also added that the Batebi family can visit their son however Ahmad’s wife, Somaya is not being given visitation rights because she spoke out and gave interviews to various members of the press about her husband’s status. Batebi’s father said that Ahmad’s voice was very weak on the phone and his son seemed listless. It is reported that other prisoners spotted him on Wednesday, August 3rd in the prison infirmary.

Batebi is on a hunger strike.

Batebi Blog has more of the latest news on his condition.