Finally, the mullacracy is doing something to fight the staggering unemployment numbers.

This week the Iranian regime announced that it was about to launch a crackdown against “decadent” satellite television dishes.

…It didn’t take them long to get cracking!

Winston already has these pictures (and more links) from Iranian student websites showing the destruction. 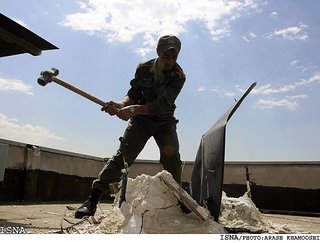 The use of satellite dishes is prohibited by law and we ask people not to use this equipment anymore,” Morteze Talaie was quoted as saying in the press.

Police armed with warrants raided rooftops of large apartment blocks and high-rises in the chic northern and western areas of Tehran on Sunday and have conducted similar operations in other cities, witnesses and press reports said.

“Police seized scores of satellite dishes in Velenjak (northern Tehran) and after loading their vans, they took off,” a resident identifying himself as Hamid told AFP. 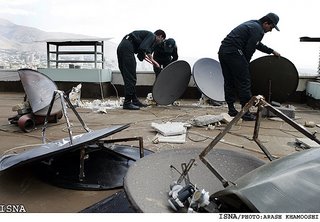 Is it no wonder then that the regime is also currently carrying out a campaign against bloggers and student activists in Iran. 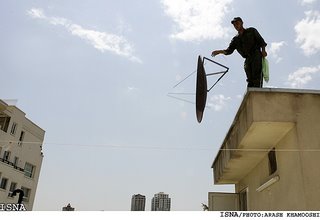 The student activists and bloggers are talking…
Are we listening?

Also, this month the regime re-arrested Iran’s famous political activist Ahmad Batebi and sentenced him to 9 more years at the notorious Evin prison.

Winston is right on with his assessment…
“Believe me, they are scared of their own people to death!”