A militant cleric alleged to be a top leader in an al-Qaida-linked terror group was released from prison in June.

Abu Bakar Bashir, 68, had served 26 months for conspiracy in the 2002 Bali bombings, which killed 202 people in the world’s most populous Muslim nation.

But, 3 Indonesian Christians will not be as lucky. 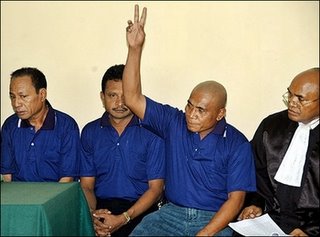 L-R: Fabianus Tibo, Dominggus da Silva, and Marinus Riwu are seen at the court in Central Sulawesi in March 2006. Indonesia will go ahead with the execution of the three Indonesian Christians on death row even though their lawyers are seeking presidential clemency for them, police said.(AFP/File/Bay Mazky)

The execution of the three Christian Indonesians will go ahead as scheduled despite the best efforts from their lawyers:

The president has already refused them clemency and they had been due to face the firing squad on August 12 until they were given a last minute reprieve. Officials have said their executions may now take place at any time.

They also urged authorities to arrest Reverend Reynaldi Damanik, head of the Protestant church synod in Central Sulawesi, for allegedly making statements that could fuel further unrest in the region.

Christians across the country have held protests to demand that the death sentences on the three are not be carried out, saying that their trial had been unfair.

Clashes between Muslims and Christians in 2000 and 2001 in Central Sulawesi province left more than 1,000 dead.

During the violent clashes in 2001, an Islamic terrorist group called Laskar Jihad threatened to eliminate Christians from the region but was held off by government troops.

Jubilee Campaign has a video from the trial of three Chrisian women in West Java, Indonesia, charged with enticing Muslim children to convert. The video depicts the day the women were found guilty and sentenced to three years in prison.

Did the unruly Radical Islamic Crowd have anything to do with the decision? Did the hundreds of Radical Muslims screaming ‘Alluha Akbar!” and “Jihad” outside the courtroom doors influence the judge at all?
…You decide.

* HERE * is a link to where you can donate to Jubilee Foundation for the good work they are doing for persecuted Christians and other religious minorities worldwide.

Update on the latest news -Here-
Previously:
3 Indonesian Christians Get Another Week to Live