Thank goodness for the internet and Haider Ajina!

It does seem strange that the Left with their multiculturalist agenda want to break up Iraq or make it Vietnam when the people there overwhelmingly (94%!) support a unity government. Here is the latest news from the Iraqi press missed by our MSM… 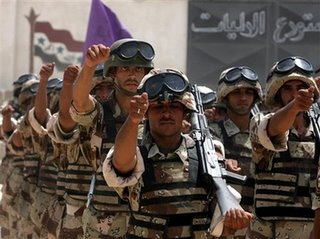 Here are two translated articles from the Iraqi media of Iraqi progress that you will not read about in our American mainstream media:

The following is a Haider Ajina translation of a headline and article from the August 10 Iraqi newspaper Alsabah.

The Iraqi Parliamentary Committee for Reconciliation (this sounds like a real democracy now) will host a conference of former Iraqi military officers (officers under Saddam’s Army). This conference is taking place because thirty-eight armed groups have expressed interest in being included in Al-Maliki’s plan and entering the political process. (Most of these groups are lead by former Baathist officers).

Eight hundred Iraqi tribal leaders will attend the tribal leader’s conference, which will be held in Baghdad some time this week (the week of August 11th since in Iraq the work week ends on Thursdays). The National Religious and Ethnic Groups Reconciliation Conference will be held outside of Iraq, in either Saudi Arabia or Jordan. (This is because some of the sectarian leaders live outside of Iraq, mostly former Baathists etc…).

While most of what we hear and read from our news is the terrorist attacks and sectarian violence, most of which is concentrated in the Baghdad and the surrounding area. Iraqi news is informing us of what the government leaders, tribal leaders, religious leaders, sectarian leaders are doing to bring peace, stability, democracy and the rule of law to Iraq. From reading about the attendance and participation in the national unity and national reconciliation plan in Iraq one would guess that only a small fringe element of Iraq and some foreign groups are all that is causing this trouble in Iraq. Survey after survey shows that Iraqis are strongly behind their government and also very demanding of their government to get the security situation under control. As is evident from the above translation. It seems the government is responding to the will of the people and trying to reconcile to strongly unite the country.

The following is a translation by Haider Ajina of a headline and article from the August 16 Iraqi newspaper Almada.

Chairman of the Provincial Congress Committee for Security of Basrah Province, Mr. Hakeem Almayahi said that thirty Basrahns from all sects of Basrah society representing twenty political parties have signed a document calling for supporting security and stability and endorsing the rule-of-law in the province.

This announcement came during a meeting of the security committee, attended by the Police Chief Mohamed Almusawi. Almayahi rebutted reports by some news companies of armed fighting in the province.

He announced that legal action would be taken against any media company, which spreads lies about the security situation. He affirmed that crime in Basrah province has declined sharply, especially kidnappings and assassinations.

The chairman announced an agreement with Iran to prevent armed persons from coming in and out of the common boarder; this should help with security and reduce accidents.

Chairman Almayahi revealed that security forces have arrested a gang forging 25,000 dinar notes. Basrah judiciary has expressed their readiness to take over the responsibility for prisoners held by British forces.

Basrah Chief of Police Mohammed Almusawi announced that security agencies are implementing a new plan to spread security and stability. We created committees, which will be visiting police stations to assess their needs. We are committed and doubling our efforts to chase down criminals, highway men, kidnappers, thieves coming from Meisan & Thiqar provinces. He added that police have recently arrested a gang of child kidnapers.

Almeda journalist then asked the Chief of Police about the return of refugee families. Almusawi said that Basrah is living a period of friendship and brotherhood, this has allowed 200 families to return in addition to the 100 families who returned previously to Basrah.

Iraq’s fourth largest city; Basrah (population around 1 million, Baghdad 5-6.5 million, Mosul 1.13 million, Irbil 1.1 million) is the capital of Basrah Province. The Province is witnessing a decline in criminal and violent activity and a return of families who left the area.

Remember that Saddam emptied Iraqi prisons from all prisoners when we entered Iraq. Hardened criminals, killers, rapists etc., along with political prisoners were all let go. The number of political groups signing on to the political process and endorsing the rule-of-law is a positive sign of recent developments in Iraq. These types of promises or honor pacts endorsing the rule-of-law and backing security and stability are being signed and pledged to in many cities and provinces in Iraq. This is a show of unity in the face of terrorists, criminals and sectarian division.

Many, if not most Iraqi families have Sunni & Shiite members some in addition have Christian and Kurd members, all Iraqi sects have been living with and amongst each other for hundreds of years, long before the formation of Iraq as we know it today.

The Southern provinces have sponsored a bill in the Iraqi parliament to start setting up federal zones. Southern, Central and Kurdish federal zones are on the table. This type of federal zoning is allowed under the recently ratified constitution. The sooner Baghdad’s power over the rest of Iraq is reduced the better off Iraqis are. The peaceful provinces (15 out of 18) want to develop their infrastructure, improve commerce and social services etc… They can do this better and more efficiently through their provincial government.