Remember the story about this anti-Hamas, anti-Hezbollah, anti-terror ad that was published in the Los Angeles Times on Thursday and signed by 84 Hollywood stars, directors, studio bosses and media moguls?

Well, now the “Zionists” are under attack! 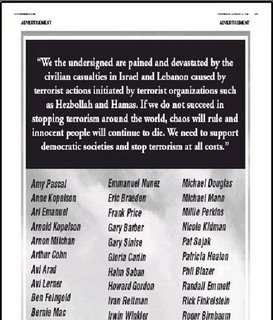 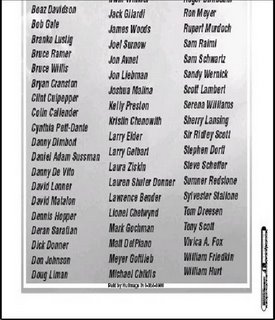 -Click to Enlarge-
Blog Bonsoir (or Acramablog) has started a letter writing campaign against these Hollywood stars, directors, studio bosses and media moguls:

On the 16th of August 2006, 84 Hollywood, media and sport celebrities published a full-page statement in Los Angeles Times, Hollywood Reporter and Variety blaming Hamas and Hezbollah for the death of Civilians in Lebanon and Israel. The statement reads as follows: “We the undersigned are pained and devastated by the civilian casualties in Israel and Lebanon caused by terrorist actions initiated by terrorist organisations such as Hezbollah and Hamas. If we do not succeed in stopping terrorism around the world, chaos will rule and innocent people will continue to die. We need to support democratic societies and stop terrorism at all costs.”

…The Israeli Consulate General in Los Angeles has been hard at work recruiting support from Hollywood movie stars from whom most of the 84 signatories came.

The statement is another shameless attempt to twist facts in regard to the Middle East conflict showing the legitimate resistance by Hamas and Hezbollah against the Israeli occupation of Palestine and Lebanon as an act of terror and portraying Israel as a poor peaceful state which has no choice but to react even more violently to stop the Palestinian and Lebanese “terrorism”.

The statement deliberately ignores the fact that both Hamas and Hezbollah did not attack civilians in the recent crisis but rather attacked and captured Israeli soldiers in a combat battle. Hezbollah did not launch its rockets and katyushas on Israel until the latter started bombarding the Lebanese cities (Where did he come up with that lie?) and infrastructure killing 1 thousand civilians, injuring thousands and forceing 1 million Lebanese to flee their homes.

In regard to Hamas, it fully respected a 14-month truce(?) since February 2005 despite the 1000s of Israeli violations of the agreement and it didn’t announce the cessation of the truce until June 10th 2006 when Israel committed a massacre on the beach of Gaza City killing 7 civilian members of one Palestinian family.

…I know many of you are fans of some or at least one of the signing celebrities; now it’s your time to decide what comes first: Your celebrity, or Palestine, justice and freedom?

I spent some time looking for the mailing addresses of the signatories. I managed to get 48 of them. It’s still a good number to start with (and don’t ask me how I got them)!

Now it’s your time to work:
1- Boycott signatories and their movies, sport matches and first of all Rupert Murdoch’s biased News Corporation media (Click here to see what firms are part of the News Corporation).

2- Urge your friends to follow your steps by showing them how Zionist celebrities can be part of the Israeli propaganda as in the statement above.

3- Now this is the most important part. Write a letter to one or more of the celebrities reprimanding them for signing the statement and for the falsification of the truth. However, although we know that many of the signatories have long profiles supporting Israel and its Zionist project, we should still give them the benefit of doubt (to be fair to everyone) and give them a bit of truthful background information about the history of the conflict and the current crisis assuming that some of the signatories simply didn’t have access to enough information that would allow them to make a fair judgement. You will find the addresses of 48 of the signatories at the end of this post. All the famous ones are available. Don’t pick only your favourites (this is not a fan club)! Let our strong message reach all of them. Sending a message to USA wouldn’t cost you more than few pennies. I would also advise you to mark your envelope with “Personal” as some letters would go to the celebrities’ agents instead of their home addresses.

That didn’t take long for these brave few from Hollywood to come under attack!

Thankfully, Bonsoir listed the addresses of all of the Hollywood signatories.
So we can start our own letter writing campaign and thank a couple of these stars, directors, studio bosses and media moguls brave enough to make a stand against terror!

Please feel free to pass this on!

Update: Laura at Pursuing Holiness was kind enough to make some Avery 5160 labels of those addresses, and they are here in both Word and PDF format.