Well, Praise the Lord! …At least not all of Hollywood is out their cotton-pickin’ minds!
This news has more shock value than most of the remakes and sequels coming out of Tinseltown lately… We did have to hear this Hollywood news from the Australian papers, but what the hey…

The Australian Herald Sun is reporting… 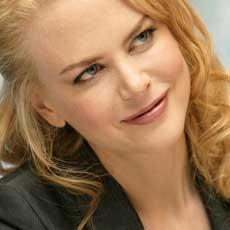 Nicole Kidman, and 84 Hollywood Heavyweights, Condemn Hamas and Hezbollah
-Apparently, this news hasn’t made the US press, yet(?)

It specifically targets “terrorist organisations” such as Hezbollah in Lebanon and Hamas in Palestine.

“We the undersigned are pained and devastated by the civilian casualties in Israel and Lebanon caused by terrorist actions initiated by terrorist organisations such as Hezbollah and Hamas,” the ad reads.

“If we do not succeed in stopping terrorism around the world, chaos will rule and innocent people will continue to die.

“We need to support democratic societies and stop terrorism at all costs.”

A who’s who of Hollywood heavyweights joined Kidman on the ad.

Democracy Project has more on this shocker.

Jules Crittenden shares what he thinks of actors.