The similarities are startling!
Well, except for the green hills, a Potato Famine or two, car swarms, and children packing bombs…

A scene from the “Irish Intifada Rally” in Dublin. 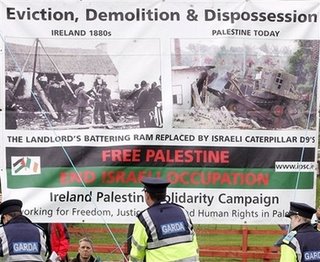 Via the AP…
Anti War protesters, watched by police, protest close to the spot were the New York Mayor Michael Bloomberg was attending the unveiling of Ireland’s National Monument to the New York National Guard’s 69th Infantry Regiment ‘the Fighting 69th’ in Ballymote, Ireland, Tuesday, Aug. 22, 2006.

Mayor Michael Bloomberg said Monday he was not bothered by anti-war protesters’ plans to greet him during his short trip to Ireland this week. Protest groups (Ireland Palestinian Solidarity Campaign) have said they are unhappy with Bloomberg for backing Israel in the most recent Middle East conflict, as well as his endorsement of Connecticut Sen. Joseph Lieberman, who supports the war in Iraq and is running for re-election as an independent candidate after losing in the Democratic primary. (AP Photo/Peter Morrison)

Wait, It Gets Weirder…
Another look at the “Irish Intifada Rally!” 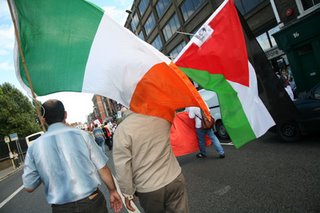 The Irish and Palestinian Flags proudly on display at the “Intifada Rally.”

And, of course, a Leftist die-in. 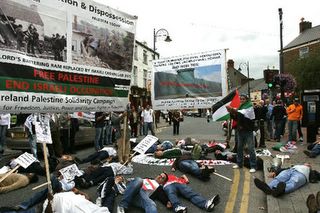 St. Patrick is rolling in his grave!