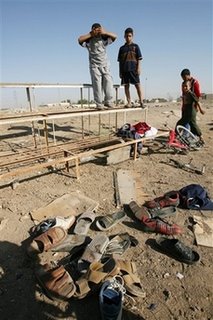 Young Iraqis gather the shoes from victims in a bomb attack on a soccer field, Thursday, Aug. 3, 2006, in Baghdad, Iraq. The two homemade bombs went off on the soccer field in the mostly Shiite district of Amil in west Baghdad, killing both players and spectators ranging in age from 15 to 25. But, unlike the children of Qana, these children, the deliberate targets of terrorists, were soon forgotten by the media. (AP Photo)

Before getting too far into today’s article, it would be good to put things into perspective. Here are two points of interest:

One- Two Shiite Muslim parties on Friday accused Iran of instigating violence in Iraq and attempting to destabilize the country.

Two- It should be noted that 94% of Iraqis, an overwhelming majority, support a unity government. This will not be offered up in the article.

Now, from the AP:

“There’s little sign that Iraq’s government of national unity is bringing together the country’s sectarian and ethnic groups — as hoped — so that U.S. troops can leave anytime soon.”

* 15 of 18 Iraqi Provinces are relatively calm.
* The South and the North of Iraq continue their redevelopment, privatization, building and improving of infrastructure.
* Iraqis are increasingly and enthusiastically taking over more and more of their security responsibilities.
* Prime Minister Nouri al-Maliki holds a very favorable 55% approval rating while his counterpart in Iran, Mahmoud Ahmadinejad, is tanking in the polls with 46.5 percent of Iranians rating the president’s performance so far as “extremely negative.”

Now, more from the AP:

“Last month, about 3,500 Iraqis died violently — the highest monthly civilian toll since the war began more than three years ago.

In all, 2,625 explosive devices either detonated or were discovered before they could explode in July — nearly double the figure for January, U.S. officials said. About 70 percent of the 1,666 bombs that did explode targeted U.S.-led forces.”

So, what does this tell us?

Either Iraqi terrorists have the worst success rate in history, or they were targeting someone else besides US soldiers
…like maybe innocent Iraqis.

It’s hard to see how putting bombs on playgrounds is helping the terrorists target US soldiers, but it obviously doesn’t matter to the barbarians doing the killing.

Finally, this may not get any attention from the press but is newsworthy:

Saddam will soon face trial for the atrocities of the 1987 Anfal campaign that killed nearly 100,000 Iraqi Kurds in Dahuk province and demolished the region’s homes and businesses.

That was just one of the charges against the butcher.

Flopping Aces has the latest media madness on Haditha.

DLSF notes that July’s number of deaths are still not as high as Saddam’s 125 deaths per day!

Dan Riehl wants to know, “If you can’t question their patriotism when they want to lose a war, when can you?”