Several participants from the local homeless shelter will be “Vicarious” (paid) protesters at the “Death to Israel” rally. 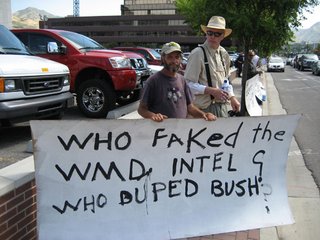 This photo is from Desultory Thoughts (Via Michelle Malkin) 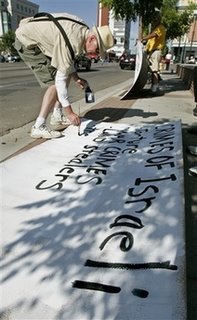 The permit will be approved next week, after the city and Breeze finalize where the demonstration, one of several planned for that day, will be held. It will run from 9 a.m. to 11 p.m.

Breeze, 52, said his goal is to protest “the torture and murder inflicted on Muslims by Israel and the penetration of the U.S. media by Israeli intelligence.”

While he said his group – the Center to Prevent Corporate Media Lying – has other members and financial donors, Breeze wouldn’t name them. And he acknowledged some of his past protests against media coverage of the Iraq war that he held in front of the KSL studios included paid participants from the homeless shelter.

Some demonstrators Wednesday also may be paid.

When asked if he wants to see the elimination of Israel, Breeze said: “The President of Iran has an excellent idea. . . . I would like to see them move Israel to Virginia and put all the current Virginians in a concentration camp. Then we’ll see how popular Israel is [in the United States].”

Jewish community members are understandably concerned about the protest in Salt Lake City.

Cindy Sheehan, too sick to join the peace protesters following the Death to Israel rally, may join the rally later in the day through a “live link”.

Salt Lake City mayor Rocky Anderson is planning on joining the antiwar protest this afternoon. 76% of those polled do not agree with this action.

Michelle Malkin has more on this rally being held at 9:00 AM this morning.

And there’s more liberal “Stomping on Israel” in the news.