Guess who showed up with Cynthia McKinney as she made the rounds yesterday during her Democratic Primary defeat?

…None other than Hashim Nzinga, the very Anti-Semitic New Black Panther leader who says that Jews had foreknowledge of the September 11 terrorist attacks.

And, Hashim saved his most vulgar anti-Semitic attacks for the media… 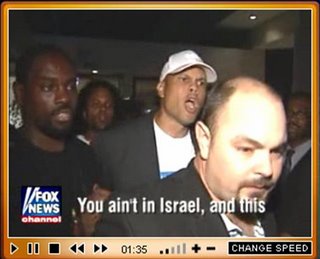 From FOX News video:
Hashim Nzinga: “You aint in Israel and this aint no Lebanese people that are going to back all up. You better get your Jewish ass…”

Brian Wilson: Anti-Semitic invectives were hurled yet again in the direction of a FOX News producer who is Jewish. 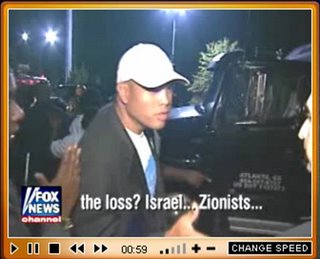 Hashim Nzinga: You want to know what led to the loss?… Israel. The Zionists. You put your yarmaluke on and celebrate.

It is amazing what this Anti-Semitic New Black Panther can get away with!!!

Don’t worry, Cynthia. Maybe there are openings with the Capital Police?

Sweetness and Light reported on more violence from the McKinney posse last night.

AllahPundit has the wacky, teary-eyed concession speech by McKinney.
Michelle Malkin at HotAir has the collector’s edition of favorite McKinney moments.

Cynthia McKinney is now blaming Republicans for her loss.
I blame this man.