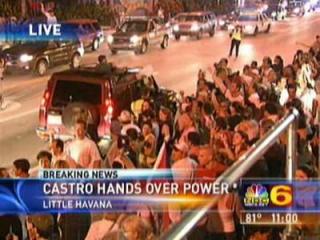 His tyrade in Argentina last week must have been too much for the old dog.

YouTube has video of a weakened Castro and his thugs attacking American journalist, Juan Manuel Cao, at the MERCOSUR meetings, something that did not make the mainstream news reports.

The BBC’s coverage of the news about Castro is pathetic. This picture, however, from the island paradise, about says it all… 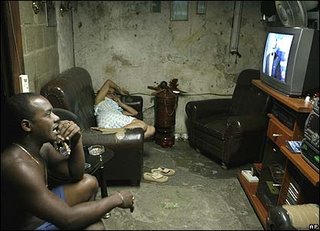 The reaction was more muted in Cuba, although correspondents said the news would come as a shock to the majority, who have known only Castro as their leader. (BBC)

The real party is in Miami! 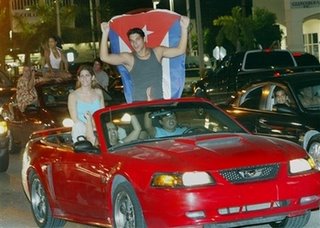 What a stark contrast Miami , Florida, is to the once beutiful island of Cuba. These kids are not old enough to remember but old enough to understand. (AP)

Michelle Malkin has more on the celebrations in Miami.
Babalu is trying to make contact with the island and is being cautious:

We probably wont see much news about fidel castro – save for the standard MSM fluff pieces on his life and how he saved Cuba with free healthcare and education and all that – coming out of the island for a few days. There were reports that some Cubans had taken to the streets in Havana but these are all unconfirmed and possibly incorrect.

Let’s all keep in mind that this “transition” has not taken place overnight. The Cuban government have slowly been weening the Cuban people of fidel castro for weeks now, publishing numerous articles and editorials in Granma, Prensa Latina, and all other government news sources, getting the public ready for the change in leadership.

Stafania at Free Thoughts has much more including reports that the Cuba to Miami phone lines are jammed!
Fausta has buddy Hugo’s reaction.
RedState reports on the rumors coming from Cuba.