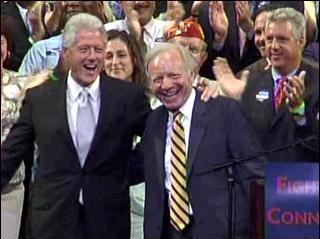 Former President Bill Clinton., left, and U.S. Sen. Joseph Lieberman, D-Conn., right, yuck it up in Connecticut on July 24, 2006, before moderate Joe was banned from the New Democratic Party. (CBS)

Only three weeks ago, Former President Bill Clinton stood on stage slapping Joe Lieberman on the back saying:

Democrats “don’t agree on everything. We don’t agree on Iraq,” Mr. Clinton said, calling the conflict the “pink elephant in the living room.”

But “the real issue is, whether you were for it or against it, what are we going to do now.”

But, after the Taliban democrats took out moderate Joe Lieberman in the primary, Bill Clinton changed his take on Joe. In an interview Tuesday with ABC News Bill now says:

Lieberman has characterized his loss — and the need for his subsequent independent run — as liberals in the party purging those with the Lieberman-Clinton position of progressiveness in domestic politics and strong national security credentials.

“Well, if I were Joe and I was running as an independent, that’s what I’d say, too,” Clinton said.

“But that’s not quite right. That is, there were almost no Democrats who agreed with his position, which was, ‘I want to attack Iraq whether or not they have weapons of mass destruction.’” (Not true… 29 Democratic Senators voted for the War in Iraq, 21 against)

“His position is the Bush-Cheney-Rumsfeld position, which was, ‘Does it matter if they have weapons? None of this matters. … This is a big, important priority, and 9/11 gives us the way of attacking and deposing Saddam.'”

This is what Bill Clinton said before the War in Iraq in late 1998:

“Saddam Hussein must not be allowed to threaten his neighbors or the world with nuclear arms, poison gas or biological weapons…”

But, back to Joe… Clinton finished off his comments on Lieberman with this:

Clinton said that a vote for Lamont was not, as Lieberman had implied, a vote against the country’s security.

Tony Snow explained this best to the gaggle:

Ned Lamont ran on a campaign of getting out of Iraq, period; getting out. You have to ask yourself at a time of choosing what this does in the war on terror, what the consequences of that are going to be. Does this help the people of Iraq or does it create a power vacuum?

Does it, in fact, support Osama bin Laden’s comments — and I want to thank one of your colleagues for setting me right on this; it was after Mogadishu, when we left Mogadishu (on the insistence of John Murtha)– that the Americans, you stay at them long enough, they’re going to lose their will…