The former Democratic Representative from Georgia and Civil Rights Leader is under fire for his racist remarks attacking Jews, Koreans and Arabs. 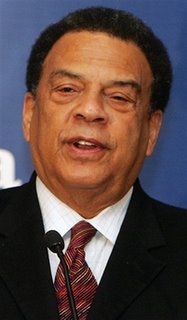 Civil rights leader Andrew Young speaks at a press conference in an Atlanta file photo from Feb. 9, 2006. Young, who was hired to help Wal-Mart Stores Inc. improve its public image, said last week he was stepping down from his position as head of an outside support group amid criticism for remarks seen as racially offensive. (AP Photo/Ric Feld, File)

Last week Andrew Young, who was hired to help Wal-Mart Stores Inc. improve its public image, announced he was stepping down from his position as head of an outside support group.

This was after his racist remarks in an interview last week as defended by the New York Times:

So vast is his reservoir of good will, apparently, that even a racially inflammatory comment he made this week seemed unlikely to draw it down.

Instead, people who have known Mr. Young for decades seem rather satisfied that his comment that Jewish, Arab and Korean store owners had “ripped off” black neighborhoods, “selling us stale bread and bad meat and wilted vegetables” had severed his link with his most high-profile client, Wal-Mart Stores, in whose defense he made the remark.

Referring to the remarks as being singled out from a long interview, Mr. Young said Friday in a telephone interview, “I thought this was kind of below the belt.”

“Now I don’t blame anybody,” he said, a day after apologizing for his remarks and resigning from the Wal-Mart payroll. “It was stupid of me to say in that context. No, it wasn’t stupid of me. I said it in the appropriate context. But I didn’t think about how it would read.”

His remarks drew ire from Jewish groups and advocates of diversity, dismay from Wal-Mart executives and a slap from the Rev. Al Sharpton.

But in Atlanta, the comments became an occasion to debate the focus of the civil rights movement and the fidelity of Mr. Young, now 74, to its ideals.

Could you imagine if this story would have been about a Republican working for Walmart?… a democrat’s wet dream! It would still be front page news, right up there next to the Ramsey case.