Charlotte Church hoped to pull off one of those “courageous” Jesus-mocking routines in her TV pilot… It didn’t go off so well. Tim Graham at Newsbusters had the story:

The U.S. publishing company Ignatius Press has refused to sell any works by Welsh singer Charlotte Church after she called German-born Pope Benedict XVI a Nazi and mocked the Catholic Church…Church, dubbed the “Voice of an Angel” before she turned her talents to popular music, also dressed up as a nun and pretended to hallucinate while eating “communion” wafers imprinted with smiling faces signifying the drug Ecstasy. She smashed open a statue of the Virgin Mary to reveal a can of hard cider inside, said she worshipped “St. Fortified Wine,” and stuck chewing gum on a statue of the child Jesus.

After the young Christian singer thought things over, she decided to yank the naughty nun scene from her pilot. It won’t be missed.
Hat Tip Larwyn

Meanwhile… In other news, (you can’t say this is “bold news” with a straight face) Madonna “bravely” mocked the Catholic Church (again) in Rome this weekend. 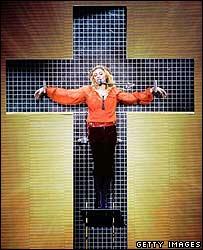 Some fans are still waiting for her to get really crazy and mock Radical Islam’s treatment of women… We’ve seen how that goes over!

And… even jazz artists are playing politics these days. J.B. Spins slams jazz artist Matthew Shippfor his outrageous remarks about the roots of terrorism. J.B. adds, “I like to think J.B. Spins is at least bringing some balance to the table when jazz addresses politics.”
Good for you!

Wasn’t there a book written about this?