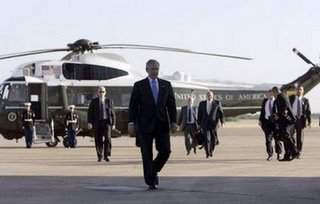 This plot is further evidence that the terrorists we face are sophisticated, and constantly changing their tactics. On September the 11th, 2001, they used box cutters to hijack airplanes and kill thousands of innocent people. This time, we believe they planned to use liquid explosives to blow up planes in mid-air. In response, we’ve adjusted our security precautions by temporarily banning most liquids as carry-on items on planes. I know many of you will be traveling during this busy summer vacation season, and I ask for your patience, cooperation, and vigilance in the coming days. The inconveniences you will face are for your protection, and they will give us time to adjust our screening procedures to meet the current threat.

I’m grateful for the outstanding work of intelligence and law enforcement officers in the United Kingdom and in our country. This week’s arrests were the culmination of hard work, cooperation, and information-sharing across different agencies and different governments. We’re dealing with a new enemy that uses new means of attack and new methods to communicate. This week’s events demonstrate the vital importance of ensuring that our intelligence and law enforcement personnel have all the tools they need to track down the terrorists, and prevent attacks on our country.

Because of the measures we’ve taken to protect the American people, our Nation is safer today than it was prior to September the 11th. Still, we must never make the mistake of thinking the danger of terrorism has passed. This week’s experience reminds us of a hard fact: The terrorists have to succeed only once to achieve their goal of mass murder, while we have to succeed every time to stop them. Unfortunately, some have suggested recently that the terrorist threat is being used for partisan political advantage. We can have legitimate disagreements about the best way to fight the terrorists, yet there should be no disagreement about the dangers we face.

America is fighting a tough war against an enemy whose ruthlessness is clear for all to see.

* The terrorists attempt to bring down airplanes full of innocent men, women, and children.
* They kill civilians and American servicemen in Iraq and Afghanistan, and
* They deliberately hide behind civilians in Lebanon.
* They are seeking to spread their totalitarian ideology.
* They’re seeking to take over countries like Afghanistan and Iraq so they can establish safe havens from which to attack free nations.

These killers need to know that America, Great Britain, and our allies are determined to defend ourselves and advance the cause of liberty. With patience, courage, and untiring resolve, we will defend our freedom, and we will win the war on terror.

My comment: So Help Us God.
If the democrats ever gain power… we’re toast.

The BBC notices that Bush links Hezbollah and ‘plot’ as if this is surprising.

And, this just out…
Fifty-five percent of Americans approve of President George W. Bush’s handling of homeland security, an 11 percent jump from May, according to a Newsweek poll released on Saturday. And, the country again believes that Republicans would do a better job (44%) at fighting terror than democrats (39%).

MSNBC does its duty for the party faithful and keeps its “but” in the headline.

The Washington Post has more news of a pouting liberal press corps.