The details of the brutal death of activist Akbar Mohammadi were released. His uncle detailed the condition of his body when it was released to the family. The original report is included in the adobe file:

A Summary of Observing the Body of Akbar Mohammadi The police and information forces of the lawless and bullying Government of the Islamic Republic of Iran put the naked body of my son in a station wagon (against all norms) and these thugs threatened that if we held a memorial service for him, they would return the body to Tehran to be buried in an undisclosed location. We were additionally threatened that if we did not agree with these conditions, they wouldn’t release his imprisoned bother, Mr. Manouchehr Mohammadi, to attend the ceremony. Mr. Saeed Ashrafpour, the uncle of Akbar, was present while the body was being washed and buried.

1. His eyes and mouth were wide open
2. His forehead was swollen, an indication that he was beaten
3. His teeth were protruding from his mouth.
4. His skull was broken
5. His front torso, from the neck to the stomach, was cut and stapled together
6. The same scenario was also repeated on his back
7. His shoulders, arms and soles were bruised badly, indicating that he was tortured
8. When he was being washed, his head and ears were bleeding and we had to stop it with cotton
9. His fingers were mangled
10. His wrists and ankles were bruised
11. There were purplish circles around his eyes
12. His weight had dwindled from about 95 Kg (approximately 209lbs) to 45 Kg (equivalent to 99 lbs)

Myself (the father), my wife and some of our relatives were present during the funeral and we can assure you that Akbar did not look like himself. It was as if Akbar had been disguised (to cover up the fact that he had been tortured). Akbar’s body was in such bad condition that the Coroner, after getting rid of the governmental thugs and showing the body to his other uncle, Mr. Ali Reza Ashrafpour, told them in confidence they should sue without hesitation or fear. 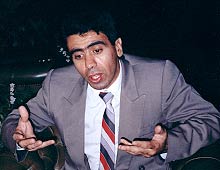