Hurricane Katrina really was the perfect storm.
– Those who believe in big government can’t believe there wasn’t help there immediately (even though people were told to bring enough for 3-4 days) for a suffering people are on one side of the aisle .
– Those who believe in personal responsiblity can’t believe that someone could lose their child in a Level 5 hurricane are on the other side.

The fact that Katrina brought out the best in America…
the hightest charitable donations ever, the time, money and homes that were offered to the hurricane victims, will undoubtably be missed again as the anniversary of the disaster approaches. 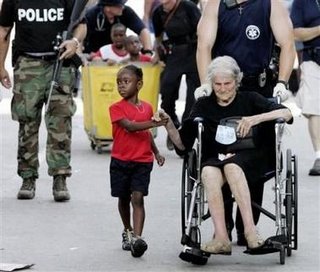 Spike Lee’s “When the Levees Broke: A Requium in 4 Parts” airs tonight on HBO.

But, news today will put a damper on Spike’s Bush-bash.

The former police chief of New Orleans admitted that he exaggerated the post-Katrina crime:

The New Orleans police chief during Hurricane Katrina, Eddie Compass, says he unnecessarily “heightened people’s fears” by repeating unconfirmed reports of out-of-control crime in the city during the aftermath of the storm, adding to the confusion caused by the disaster and potentially hampering rescue efforts.

“There were reports of rapes and children being raped. And I even got one report … that my daughter was raped,” Mr. Compass says in the Spike Lee documentary “When the Levees Broke: A Requiem in Four Acts,” scheduled to air on HBO tonight.

Mr. Compass resigned from his post as New Orleans police superintendent in September 2005.

“In hindsight, I guess I heightened people’s fears by me being the superintendent of police, reporting these things that were reported to me,” Mr. Compass said of the unverified accounts of crime and disorder in flooded New Orleans that he repeated to the press and on “The Oprah Winfrey Show.”

If you read the blogs, you already know about this. But, the fact that Katrina also brought out the best in munaity will have to be saved for another day… like when President Bush leaves office.

Here are a couple of earlier posts on Katrina:
More Hurricane Katrina: Folklore vs. Fact
The Katrina Deaths
Katrina Facts & Fiction on Racism