With all the chaos in the world created by the mullahs in Iran, you’d think that Jimmy Carter would want to keep a low profile for a while…

…But, not this dangerous fool. 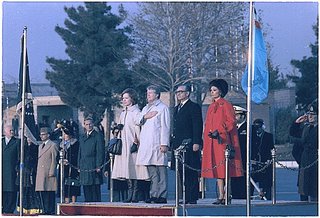 Jimmy and the Shah on a trip to Tehran, before Jimmy let America’s great ally slide into the hands of the radical Islamic mullahs. (Parstimes)

Just how different would the world be today if Jimmy would not have handed over Iran to the radical Islamic mullahs?

The Washington Post brings you this latest piece of drivel from America’s eternal president:

Leaders on both sides ignore strong majorities that crave peace, allowing extremist-led violence to preempt all opportunities for building a political consensus. Traumatized Israelis cling to the false hope that their lives will be made safer by incremental unilateral withdrawals from occupied areas, while Palestinians see their remnant territories reduced to little more than human dumping grounds surrounded by a provocative “security barrier” that embarrasses Israel’s friends and that fails to bring safety or stability.

A major impediment to progress is Washington’s strange policy that dialogue on controversial issues will be extended only as a reward for subservient behavior and will be withheld from those who reject U.S. assertions.

It leaves you speechless, doesn’t it?

First of all, the “provocative security barrier” has brought safety and stability- a decrease in attacks by 90%. You would think that Jimmy would know this- maybe he does.

And, then for the gall of James to blast Bush for “band-aid treatment” makes absolutely no sense. The Bush plan is anything but a “bandaid treatment” to the crisis in the Middle East.

It’s just too bad that President Bush has too much class to fire back on that moral equivocating prideful idiot.

California Conservative asks, “Who is responsible?”