Two counts of contempt towards officials (Article 88) – specifically President G. W. Bush, three counts of conduct unbecoming an officer and a gentleman (Article 133), and one count of missing movement (Article 87). If convicted of all six charges by a general court-martial, Lt. Watada could be sentenced to over seven years in a military prison.

That was from his Charge Sheet. (pdf)

Lt. Watada has been speaking out against the war in Iraq and against the Bush Administration since he publicly declared in a news conference that he was going AWOL. 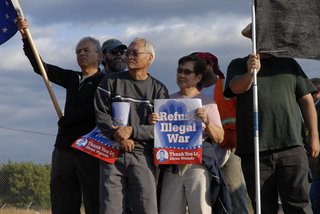 Lt. Watada’s step mother Rosa Sakanishi and father Robert Watada listen to speakers at the rally on August 12, 2006. They also spoke.
-His father Robert was also a peace activist who opposed the Vietnam War.

But, as Michelle Malkin wrote earlier…
A DESERTER, NOT A “DISSENTER”

Oh, by the way, this brave hero of the Left, Lt. Ehren Watada, joined the military after the start of the War in Iraq (?)

Here is part of his statement in June:

It is my duty as a commissioned officer of the United States Army to speak out against grave injustices. My moral and legal obligation is to the Constitution and not to those who would issue unlawful orders. I stand before you today because it is my job to serve and protect those soldiers, the American people, and innocent Iraqis with no voice.

“It is my conclusion as an officer of the Armed Forces that the war in Iraq is not only morally wrong but a horrible breach of American law”… blah, blah, durka, durka…

Who died and made him president?…
Who forced him into the military?…
Who forced him into the military after the start of the War in Iraq?…
And, why is it that even though there is plenty of evidence that Saddam had ties with Al Qaeda, that Al Qaeda was in Iraq before the war started, and that Saddam had weapons of mass destruction that the Left continues to ignore this even if you put a sarin shell on their lap?

It is Watada’s own statements that the Army brought to court as evidence against Lt. Watada. (Hat Tip Lucianne)
From the Honolulu Advertiser:

A lieutenant facing possible court martial for refusing to go to Iraq called on other soldiers to throw down their weapons in a video shown yesterday as the Army mounted its case against the officer.

The video, taken at the Veterans for Peace convention last weekend in Seattle, was presented by Army prosecutors at Fort Lewis during a hearing to determine whether 1st Lt. Ehren Watada will stand trial.

Watada, a 1996 Kalani High School graduate, was charged last month with conduct unbecoming an officer, missing troop movement and contempt toward officials. He refused to deploy to Iraq on June 22 with his Stryker unit, the 3rd Brigade, 2nd Infantry Division based at Fort Lewis.

Watada, 28, has been reassigned to the Headquarters and Headquarters Company, I Corps, and works in an administrative position at the post.

The prosecution played three video clips with comments Watada made over the weekend as well as on June 7, when he publicly announced his decision to refuse deployment.

Here is part of the evidence the government brought against Lt. Watada in court this week posted at YouTube from a talk he gave last weekend!

The US Army did not have to look far for evidence against First Lt. Watada. The government just used his own words against him from a Veterans for Peace meeting the week before his trial.