Last week the New York Times wrote that “the insurgency in Iraq has gotten worse by almost all measures”:

Bombs Aimed at G.I.’s in Iraq Are Increasing

WASHINGTON, Aug. 16 — …”The insurgency has gotten worse by almost all measures, with insurgent attacks at historically high levels,” said a senior Defense Department official who agreed to discuss the issue only on condition of anonymity because he was not authorized to speak for attribution.

But, Back Talk took at a look at 7 month trends and found a very different picture of Iraq. 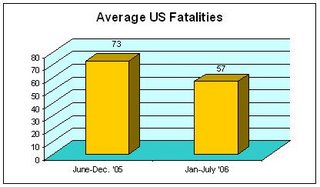 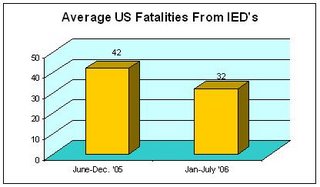 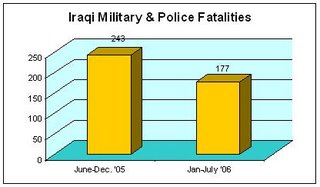 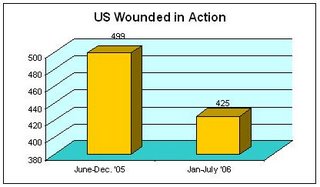 I am surprised that the New York Times cannot even be trusted to consult readily available data that can be easily examined to evaluate their judgment of the strength of the insurgency.

The official spokesman for the Iraqi department of defense, Mr. Muhamed Alaskari said, “Armed attacks have substantial decline, about a 70% decline compared to the last few weeks.”

And… The BBC is even reporting the joint operation to improve security in Baghdad is bringing results.

Now, the mainstream media may try to fool you claiming that “70 percent of the 1,666 bombs that did explode targeted U.S.-led forces” in Iraq (AP).
But, if what the AP was saying was true…
Around 4% of the 1,666 (70% of the total) exploding bombs in Iraq last month hit their target.

Iraqi police and security watched over a million Shiite pilgrims gathered in peace over the weekend in Baghdad’s Kadhimiyah neighborhood to commemorate the death of the 7th Imam. 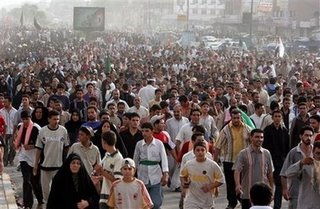 Iraqi Shiites pilgrims march toward the Imam Mousa al-Kadim shrine, for the annual commemoration of the saint’s death, in Shiite district of Kazimiyah, in Baghdad, Iraq, Sunday Aug. 20, 2006. (AP)

As far as “Iraqis Are Staying at Home” as the New York Times suggests, in the Holy City of Najaf where much of the economy is based on tourism, here is a first hand report (from an email):

Business in Najaf is booming similar to Irbil (in the Kurdish region). Security is good and our forces are ready to hand over the full province to the Iraqis in the next few months.

Back Talk also discusses what the coming election will mean, not just to America, but to innocent Iraqis living in a fragile democracy. Either the “Cut and Run Lamont Option” will prevail and the real slaughter will begin, or the “Stay the Course Option” will win out.
We will know soon enough.

Powerline looks at the civil war allegations coming from Iraq.
JeffreyMark looks back at Saddam’s slaughter.
The Futurist is absolutely correct.