Via Stefania…
The grave of Howard Baskerville, the “American Lafayette in Iran”, was covered with flowers today as it is every year on the anniversary of his death. 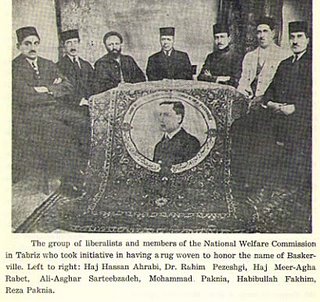 Daneshjoo has this on Howard Baskerville:

The tomb of a forgotten maverick American who fought for Iran’s Freedom and its Constitutional Revolution was covered, today and as like as precedent years, with flowers deposed by dozens of Iranians. “Howard Baskerville” was a young American Missionary who helped the Iranian revolutionaries, 100 years ago, in order to fight for their basic rights despite the objection of the then US Administration.

Baskerville helped forming the Constitutionalist Militia in the northern City of Tabriz, cradle of the revolution, and fought against governmental troops in order to defend the city. He will fall while defending the walls of Tabriz but his bravery will galvanize the Iranian detachment placed under his command. The Iranian 1906 Constitutional Revolution will ultimately win over the forces of oligarchy and repression and will seize, later, the Iranian Capital.

The movement, which was an unprecedented vanguard modernist trend in Asia, paved the way for the establishment of Nationalist, Secularist and Democratic principles in Iran.