With a perfect record of “0 & 21”, the Kos Kids have usurped control of the Democratic Party…

And, oh, how the new leadership of the democratic party hates their moderates!

It’s been a rough go for Joe these past few years.
From being on top of the Democratic Party… 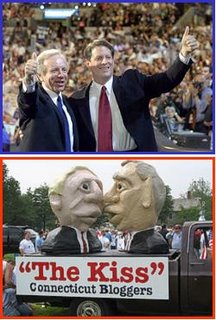 …to being castigated by the more and more liberal base.

As further proof of the direction of the Democratic Party this week, Hillary Clinton, is now openly distancing herself from the last of the moderate democrats:

“I’ve known Joe Lieberman for more than 30 years. I have been pleased to support him in his campaign for reelection, and hope that he is our party’s nominee,” the former first lady said in a statement issued by aides.

“But I want to be clear that I will support the nominee chosen by Connecticut Democrats in their primary,” Clinton added. “I believe in the Democratic Party, and I believe we must honor the decisions made by Democratic primary voters.”

Facing a stronger-than-expected Democratic primary challenge from millionaire businessman Ned Lamont and sagging poll numbers because of his support of the Iraq war, Lieberman said Monday he will collect signatures to ensure a ballot spot as an independent for the November election if he loses the Aug. 8 primary.

There is an obvious way out for Joe Leiberman. All the moderate Joe needs to do is proclaim that George Bush is behind the collapse of the Twin Towers on 9-11. His democratic poll numbers would immediately soar and Hillary Clinton would once again be at his side. The ball, Joe, is in your court.

AllahPundit has more on the “Party Girl” from New York/Arkansas.