Heavy hearted and all…
Valerie Plame says a few reckless individuals in the current Administration betrayed her trust,
Video HERE

The poor dear…
Val and Joe have suffered enough. 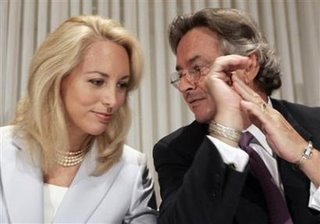 Valerie Plame says that those who acted so harmfully against our national security must answer for their shameful conduct in court:

Plame told a news conference that “I and my former colleagues trusted the government to protect us in our jobs” and said it “betrayed that trust. I’d much rather be continuing my career as a public servant than as a plaintiff in a lawsuit.”

Said Wilson: “We are under no illusions about how tough this fight will be. But we believe the time has come to hold those who use their official positions to exact personal revenge accountable and responsible for their actions.” His wife said they decided to pursue the lawsuit with “heavy hearts.”

In the suit filed Thursday in U.S. District Court, Plame and her husband said that Cheney, Rove and Cheney’s former chief of staff, I. Lewis Libby, leaked her CIA status to reporters to punish Wilson for criticizing the Bush administration’s motives in Iraq.

Plame’s identity as a CIA officer was revealed in a July 14, 2003, article by syndicated columnist Robert Novak. At the time, Plame’s job as an operations officer was classified information.

It’s too bad about World War III braking out today. They could have had more of that camera action they crave.

The Plame-Wilsons say they did not want to be plaintiffs in a lawsuit but that did not stop them from threatening to sue Cheney and Rove on November 2, 2005 or Paul Vallely on November 5, 2005.

** And, back on November 2, 2005 Joe Wilson threatened to sue Cheney and Rove in a fluff interview with Keith Olbermann on Countdown saying, “It’s a fairly easy case.”
Video HERE
(Warning- it’s 11 minutes of pomposity and lapdog interviewing.)

Maybe not so easy… Captain’s Quarters takes a stroll through Joe Wilson’s half-truths that may come back and bite him in court.

Earlier this week:
Now the World Knows, Novak Got Plame’s Name from Joe Wilson
Robert Novak Speaks on His Role in the Plame Affair (Video)
The Wilson-Plames Forced to Bring Suit Against Dick & Karl
Sheer Hell! How Else to Describe the Life of Hero Joe Wilson?