The Anti-American thugs Hugo Chavez and Mahmoud Ahmadinejad crashed the African Union Summit to gain support for their Anti-American agendas.

They seem to get along well… 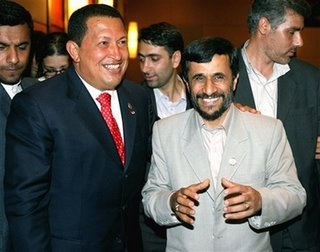 In this photo released by Xinhua news agency, Venezuela’s President Hugo Chavez, front left, and Iran’s President Mahmoud Ahmadinejad, front right, walk to the assembly room of the 7th ordinary session of the Assembly of the African Union (AU) in Banjul, capital of Gambia, Saturday, July 1, 2006. African leaders opened a summit addressing their continent’s many woes Saturday while offering a special welcome to the firebrand presidents of Iran and Venezuela, each seeking support for anti-American agendas. (AP Photo/Xinhua, Wang Ying)

Ahmadinejad was a special guest of the host nation, Gambia(?) The Iranian leader addressed the crowds at a mosque for Friday prayers calling for the unity of oppressed nations “despite opposition of the bullying powers”.

The African leaders were able to agree on an African Human Rights Court but failed to reach agreement on the Darfur Region in Sudan where over 200,000 have lost their lives in the last three years.

UN Secretary General Kofi Annan said at the African Union summit that the conflict in Darfur is one of the most dreadful in the modern history.

No surprise, Chavez blamed the African situation on the colonialists… “Africa, with vast human and material resources, was not poor but rather suffering from years of exploitation by the colonialists.”

Well, obviously there were more than the the two skunks at the summit. 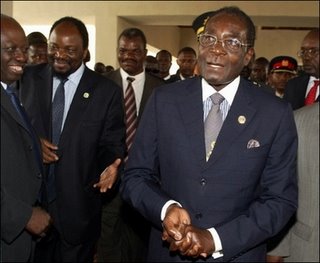 Zimbabwean President Robert Mugabe arrives for the opening session of an African Union summit of more than 50 African heads of state in Banjul, Gambia, aimed at pursuing regional integration but overshadowed by conflicts in the Darfur region of Sudan and in Somalia.(AFP/Seyllou)

This is news… “Venezuela is hoping for African support in its bid for one of the rotating seats on the U.N. Security Council, a proposal opposed by the United States.”

Gambian Blog has more on the “Summit of Despots.”