After months of pain, suffering and wondering if their vacation plans to Europe would be disrupted…
The Plame-Wilsons filed suit against Dick, Scooter and Karl today.

Amazingly, through all of this intense anguish, it was only through support from their friends… 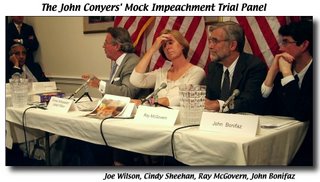 …That the Plame-Wilsons were able to make it through this most difficult period.
Click to Enlarge
(Jeff Gannon)

After Patrick Fitzgerald let them down, the Plame-Wilsons were forced to bring suit against Cheney and Rove today:

The lawsuit alleged “a conspiracy among current and former high-level officials in the White House” to “discredit, punish and seek revenge” against Plame’s husband, former Ambassador Joseph Wilson, for publicly disputing statements made by Bush justifying the war in Iraq.

The suit was the latest twist in a long-running saga over the public exposure of Plame that put President Bush on the defensive over his campaign to justify the war and reached into the highest levels of the White House.

The lawsuit comes at a time when Rove, Bush’s top political aide, seeks to keep Congress in Republican hands in November elections. Rove learned last month he would not face criminal charges in the CIA leak investigation.

It has been a very difficult period for the Plame-Wilsons. 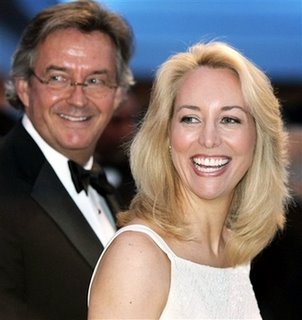 It will be interesting to see how Joe Wilson explains that it was not Aldrich Ames who outed his wife in 1994 but rather Bushco in 2003.
Hat Tip Free Republic

Earlier this week:
Now the World Knows, Novak Got Plame’s Name from Joe Wilson
Robert Novak Speaks on His Role in the Plame Affair (Video)