“…It is the duty of every true Muslim to condemn these atrocities and root out those among them who preach and practise such hatred and bitterness. Muslims will do this not just because of their faith, but because it is the duty of us all to respect and uphold the law.”

Today is the one year anniversary of the London Tube Bombings. 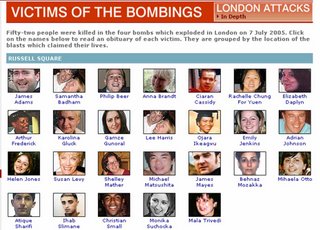 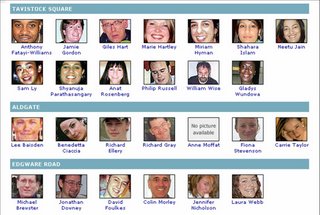 Two of the four London bombers were expectant fathers who never saw their babies! 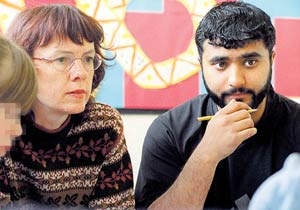 Mohammed Sadique Khan and his wife were expecting their second child. He was a popular teacher in Leeds. He married for love and had a harmonious marriage. They almost never argued. 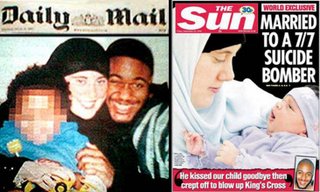 Jamaican-born resident of Britain, Lindsey Germaine was the fourth bomber identified in the 7/7 blasts. He is pictured with his pregnant wife and son before the bombings (on left). Also shown is the front page of the British newspaper, The Sun, from September 23, 2005. The paper carried an exclusive interview with Samantha Lethwaite, the widow of Germaine Lindsay, one of the suicide bombers who killed 52 people in attacks on London’s transport system on July 7. (Reuters)

Lewthwaite, who gave birth to the couple’s second child in September 2005, said she wept when anti-terrorist police showed pictures of Lindsay on surveillance film in the run-up to the bombings. She said, “He kissed his son goodbye and went to blow up King’s Cross.”

Hasib Hussain was the terrorist who detonated a bomb on the No. 30 bus that exploded in Tavistock Square, killing 13 of the 56 people killed in the suicide bombings, plus himself. Investigators found his remains and personal effects on the bus. Aged 18, he was the youngest of the group of four.

Shehzad Tanweer was a British born Muslim who excelled at sports. After he came back to London from a Pakistani Koran school he attended mosque up to five times each day. A picture from London bomber Shehzad Tanweer’s martyrdom video (on right) was released on Islamist websites just on July 5, 2006, a year after his homicide bombing.

Please, remember those who were slaughtered by these radical Islamists one year ago today.

Pajamas Media has a terrific blog roundup on the anniversary of this tragedy.