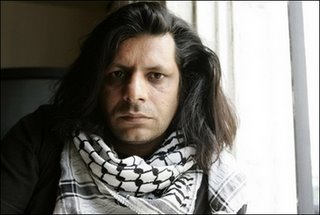 This file photo shows rapper Aki Nawaz posing at his West London office last month. Two directors at Nawaz’s record label have threatened to quit if his latest album, which includes words predicting US decline at the hands of Muslims, was released.(AFP/Shaun Curry)

Here is what the critics are saying about Aki Nawaz’s latest CD, All Is War (The Benefits of G-Had):

Fashioning songs likening Osama Bin Laden with Che Guevara and a track about a suicide bomber, Nawaz may have to face a harsher audience should authorities choose to enforce new legislation prohibiting the glorification of terrorism. While Nawaz claims to abhor violence against civilians, while lyrics in “I Reject” say:

Or the track entitled “Parasites” where Nawaz sings:

“But revenge will be mine, with my last breath I will rise to curse you
Because you, you dogs and parasites have made us helpless…”

Finally there is the rage filled “Cookbook DIY” with lyrics that claims:

“These might just be seen by public officials as promotion of a holy war rather than frank, open discussion of the oppressed Muslim communities around the world.”

Here is the website for the latest CD, “G-HAD” 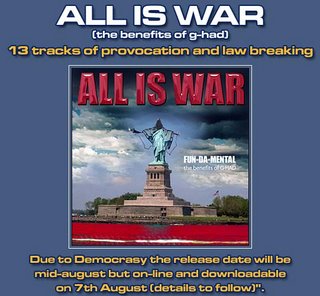 And, here are the shocking lyrics to Electro G-had:

On the day of Vaisakhi, Udham Singh made this solemn prayer,
‘Oh my Guru, May I take revenge on those who murdered my people at Jallianwalla Bagh. I ask for your blessings in this task.
After 20 long years, the hero Udham Singh tracked down the main culprit, Sir Michael O’ Dwyer and exacted his revenge in the home country of his oppressor.

The evil regime was knocked into place by his back handed stroke.

In the house of freedom fighting revolutionaries, was the warrior Bhagat Singh born.
As a child, he vowed to free his country by planting weapons in the fields, in order to arm his people.
It is rare to find a hero such as Bhagat Singh, who laughs in the face of his oppressor at the moment of death.
After shaking the throne of oppression with bombs, he gave his final sacrifice.

The evil regime was knocked into place by his backhanded stroke…

That is some sick stuff!
What absolute trash!
It’s a shame that kids are going to listen to that mess!

The lyrics to the other singles are posted at the G-Had website.
Whew! And, don’t forget that Aki is predicting a US decline:

The United States is a country built on theft and mass murder yet it propagates the idea it is a civilized nation. Since 9/11 it has displayed all the evidence necessary to find it guilty of genocide and mass murder. Thus we will see its demise in the future, even if this seems like a dream, eventually its own citizens will turn their backs and beg to be liberated by those which it is currently attempting to destroy…Muslims. Islam will come back to haunt it. No Hollywood movie mogul would dare to imagine such a scenario…but here is the theme to the future. The emancipation of the United States will come from within but with the help of those forces that it attempted to destroy.

The release date for this trash has been pushed back to August.