Swedish television showed the rally but didn’t stick around to film the chaos,
VIDEO HERE. 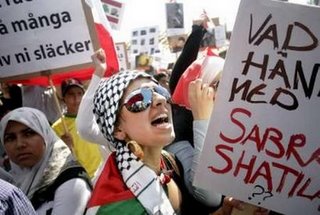 Riots broke out after a protest against Israel in Stockhom, Sweden, yesterday (Via Little Green Footballs):

Some 2,000 people demonstrated in central Stockholm on Saturday against Israel’s offensive in Lebanon, with two people arrested after clashes with police, police said.

The demonstrators then marched to the Israeli embassy, chanting slogans.

After the demonstration was formally concluded, several hundred protestors clashed with police, throwing stones and objects at police officers.

Onlookers were upset that the demonstrators carried swastikas during their Anti-Israeli march on Saturday:

Palestinian groups demonstrating in Malmö on Saturday against the war in Lebanon carried placards displaying swastikas. Now politicians in the city are calling for official funding of the Malmö Palestinian Association to be frozen.

“I think that we should talk to the Palestinian Association’s leadership about the values of their members, before they get more subsidies,” Liberal Party councillor Iva Parizkova Ryggeståhl said to Sydsvenskan.

One placard at the demonstration compared the swastika to the star of David.

A spokesman for the Palestinian Association of Malmö dismissed Ryggeståhl’s criticisms when called by The Local.

Nice of them to talk about withholding subsidies, anyway.