Killer Naveed Haq
– reportedly a nice guy, except for when he climbed the pole in the mall three months ago and flashed his penis to the women walking by. 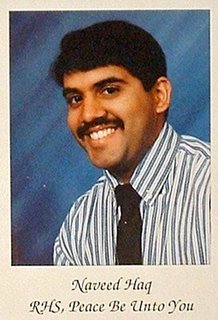 Richmond High School, Class of 1994
“Peace Be Upon You”
Michelle Malkin has more on Naveed.

Update: One person is dead!!!
(More Updates Below)

This is a picture of the suspect being led away by police after the shootings in Seattle where one person was killed today at a Jewish Center, from KING5 Video 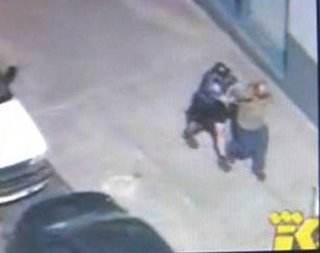 Local news reporters say that a shooter had made his way past security and onto the top of the building where he started firing from the roof.

One of the shooting victims is 17 weeks pregnant! 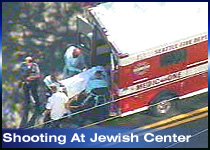 Photo from ABC KOMO News.
KOMO has live video on their website.

At least three people have been shot at the Jewish Federation at 2031 Third Ave. in downtown Seattle. One person has been taken into custody.

The three victims are believed to be women. One was reportedly shot in the abdomen and another was shot in the arm. They are being taken to Harborview Medical Center.

The incident began around 4 p.m. Part of Third Avenue and Second Avenue near Lenora have been closed to traffic. Police are urging people to stay away from the area.

At least three people were seen emerging from the building, which has two or three stories, escorted by police. It’s not known if they were hostages…

…One shooter is confirmed and in custody, he said. As of yet he said there is no motive. It’s not yet known if the incident is politically motivated.

The Seattle Times has this breaking news:

Michelle Malkin has updates on this terrorist act. 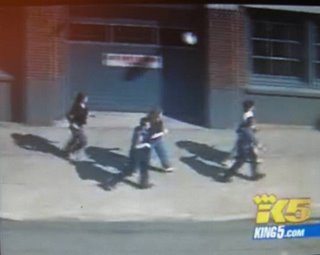 Workers fleeing the scene from a KING 5 video.

King5 News has video (HERE) of police with guns drawn during the chaos. The video also shows police hauling a suspect away (from a helicopter camera). 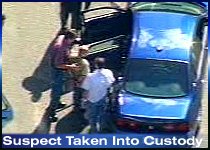 Another picture of the suspect from KOMO News.

Update 4: Police say they believe the gunman was acting alone and not part of any larger organization. 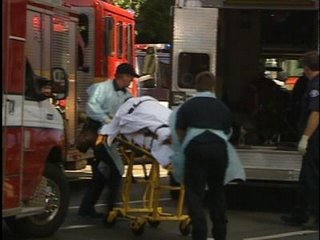 One of the shooting victims being wheeled away (KIRO News)

Pajamas Media has several updates on the situation.
Glenn Reynolds sees two different versions on the suspect’s nationality.
Jihad Watch has thoughts on this Islamic violence.
Strata-Sphere is covering the situation.
Powerline thinks this an odd reaction for a religion of peace.
Sound Politics blog out of Seattle has more disturbing news from Seattle this week.