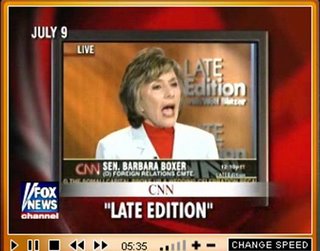 From Late Edition with Wolf Blitzer:

SEN. BARBARA BOXER (D), CALIFORNIA: Well, I could just tell you this, Wolf. When I went to Iraq about a year ago and spoke to General Casey, he was very clear on the point that our long-term presence is counterproductive, that it is fueling the insurgency; it is making matters worse…

BOXER: We are putting our military into an absolute nightmare.

Everyone says war is hell. We know that. We all use that word. This particular situation, they don’t know who the enemy is, they’re having a lot of problems.

One in three has post-traumatic stress. They are in deep trouble over there, our troops are. And many of them are being sent onto the battlefield with anti-depressants.

I really feel that the whole issue here is getting out of there. And yes, you’re going to have troops act in a way that is just unthinkable, because of the stress they’re under and because of this mission which is very unclear to me… 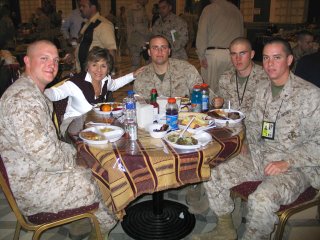 Senator Boxer with marines in Iraq. (3/22/2005)
Well, they do look a little depressed sitting with her!

It is not clear where the senator came up with her numbers on post tramatic stress disorder. 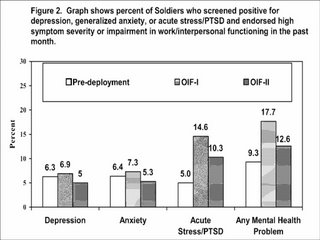 Here is the breakdown on the prevalence of depression, anxiety or acute stress/PTSD by unit type (page A-25) : 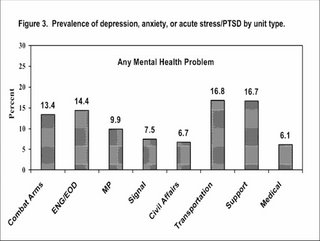 Obviously, the numbers from the study (not to minimize the seriousness of PSTD) show half as many cases of PSTD than Boxer claims. You have to wonder what far left source she gathered her data from.

Then there is this statement by Senator Boxer that:

“Many of them are being sent onto the battlefield with anti-depressants.”

According to Colonel David Hunt from the FOX News segment above:

“They are not sending kids who have antidepressants into combat. In fact, if a soldier is taking antidepressants he can’t go into combat… I’m afraid there’s some lying going on. Boxer knows better. She took some statistic and embellished and once again used soldiers for her political purpose.“

Senator Boxer makes it sound as if our troops are “forced” onto the battlefield in some kind of doped up stupor. No wonder the colonel was upset.