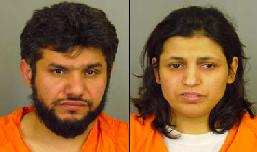 Homaidan Al-Turki, left and his wife, Sarah Khonaizan, were accused of kidnapping and keeping a woman as a domestic servant against her will, along with physical and sexual abuse, in their Aurora, Colorado home. (Denver Post)

Slapstick Politics has the latest outrageous developments in this case.

And… Charles Johnson reports on an Egyptian couple (victims of “Islamophobia,” no doubt) pleading guilty to slavery charges in California.

The AFP reported that the couple “kept the girl in an unfurnished, unventilated, and unlighted garage that building inspectors deemed “deplorable.”

As part of the plea deal, the defendants were each required to pay the young Egyptian girl more than $101,000 in restitution.