Two died when Rockets hit Haifa today as the situation in the Middle East continued to escalate. 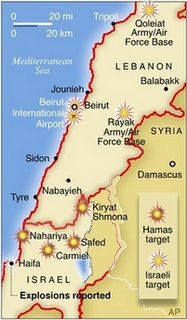 Israel has tonight issued a warning to Lebanon to evacuate all residents from a southern Beirut neighbourhood, where it believes the Hezbollah leader Sayyed Hassan Nasrallah lives. Hezbollah has responded to the warning and the implied threat of an imminent assault by saying it will bombard Israel’s third largest city, Haifa, if there are any further Israeli attacks on Beirut. The rising tensions come as Israel continues its blockade of Lebanon, along with an air, sea and ground offensive aimed at forcing Hezbollah militants to release the two Israeli soldiers it kidnapped yesterday. Our Middle East correspondent Matt Brown has just filed this report, and a warning: his story contains images of children killed in an air raid. 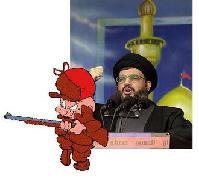 The Elmer Fudd sounding Hezbollah leader may want to stay away from his office today.

Egyptian Sandmonkey has been following the situation closely and has many, many updates.

Ehud Goldwasser (left) and Eldad Regev were captured by Hizbollah Wednesday. There is information that Hezbollah guerrillas are trying to take them to Iran.

The UN Security Council failed to pass a resolution condemning Israel after the US vetoed the motion.

Democracy Project sees Bush standing alone, again.
ShrinkWrapped looks at the Hezbollah threats.
Tigerhawk says Iran has made its move!
Coalition of the Swilling says that Israel has blasted the Beirut airport… again.
Iraq the Model has thoughts on what made Hezbollah act out now.
The Australian Daily Telegraph has blogger reaction to this crisis.
Vital Perspective is tracking the developments.
OP-FOR has much more on the Iranian connection.