Robert Novak says he does not believe there was a conscious effort to manipulate him by the White House,
FOX VIDEO HERE

Novak says Plame was not a secret agent. There was no one indicted for the violation of the Intelligence Identity Act. 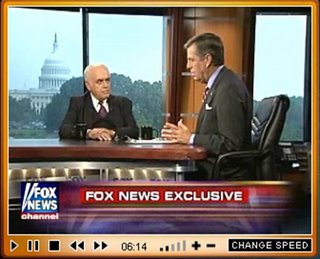 Robert Novak speaks on his role in the Plame affair and her role in getting her husband, Joe Wilson, the fact-finding trip to Niger:

The senior Bush administration official who gave Robert Novak information about former CIA officer Valerie Plame’s role in sending her husband, Amb. Joe Wilson, to Niger in 2002 was not trying to discredit Wilson, the columnist told FOX News on Wednesday.

Novak also said he doesn’t believe the senior administration official, whom Novak referred to as “Mr. X,” had the conversation with him about Wilson’s fact-finding mission on Iraq’s nuclear weapons program as part of a “conscious effort to manipulate me.”

“I saw no such campaign. Nobody in the administration ever said anything critical about Wilson to me,” he said.

Mr. X told Novak that Wilson’s “wife worked in the office of nuclear proliferation in the CIA, and she suggested he go. That was it,” Novak said.

He added that he was later told by CIA Public Information Officer Bill Harlow that Plame didn’t initiate the trip but once she was asked about it, she suggested her husband be sent. A Senate Intelligence Committee report later concluded that Plame played an important role in getting Wilson sent to Africa.

Novak said Harlow also encouraged him not to write the article, not because he was concerned that Plame was in a classified post, but because it could disrupt her future travel to Europe on vacations with her husband.

The liberal David Corn who early on suggested a crime is pouting tonight.
Tom Maguire… “No Fitsmas, No Mas.”
Wizbang has an easy to follow history of this case.