President BUsh thanks the troops today for their valor and patriotism,
Reuters Video Clip HERE.

“Because of your courage, every day is Independence Day in America!”
(Applause!) 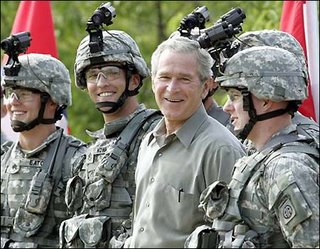 July 4: President Bush smiles as he poses for a group photo with military personnel during his visit to U.S. Army Special Operations Command at Fort Bragg, N.C. (FOX)

THE PRESIDENT: Thank you all. Thanks for the warm welcome. (Laughter.) It’s a pleasure to be back here at Fort Bragg — “Home of our Airborne and Special Forces.” (Applause.)

I flew down on Air Force One, and our pilot, Colonel Tillman, he said, “I can open the hatch and drop you out by parachute.” (Laughter.) I said he had the wrong President Bush. (Laughter.) Old ’41, I call him — happens to be my dad — has jumped five times with the Golden Knights of Fort Bragg. (Applause.) Mother appreciates you helping him down safely. (Laughter.) He’s the only skydiving President, and that’s a distinction I think he’s going to keep. (Laughter.)

Ever since I left the White House this morning I’ve been looking forward to coming here and saying, HOOAHH! 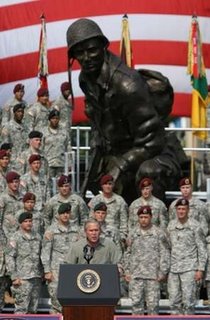 President Bush makes a promise to the troops fighting in Iraq:

When I spoke here a year ago, Iraqis still had a transitional government that was operating under administrative law issued before the restoration of sovereignty. Today, Iraqis have a permanent government chosen in free elections under a democratic constitution that they wrote and they approved. And the Iraqi people have a courageous leader in Prime Minister Maliki, who has formed the cabinet and laid out a clear agenda for the people of Iraq.

There’s more work to be done in Iraq. The Iraqi people face deadly enemies who are determined to stop Iraq’s new unity government from succeeding. They can’t stand the thought of liberty. Our strategy is clear, our goals are easy to understand: We will help Iraq’s new leaders, we will help the people of Iraq build a country that can govern itself and sustain itself and defend itself as a free nation. Our troops will help the Iraqi people succeed because it’s in our national interests. A free Iraq in the heart of the Middle East will make America and the world more secure. (Applause.)

I’m going to make you this promise: I’m not going to allow the sacrifice of 2,527 troops who have died in Iraq to be in vain by pulling out before the job is done. (Applause.)