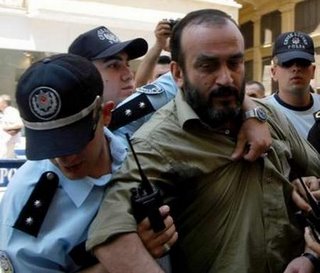 A protester is detained by riot police during a demonstration in protest against the killing of Chechen rebel leader Shamil Basayev in front of the Russian consulate in Istanbul July 12, 2006. (REUTERS/Stringer)

For the “martyrdom” of Shamil Basayev, the military commander of the Mujahideen Shura Council in Chechnya, the Mujahideen Shura Council in Iraq issued a statement of eulogy today, July 12, 2006, offering condolences to the Islamic Ummah [Nation] in general and the Chechen Mujahideen in particular. The group prays for Allah to accept Basayev as a martyr, and on this occasion, they encourage the Mujahideen to “rejoice” for his death, since they believe that martyrdom is the reward for those who fight in the front lines for the “Cause of Allah”. As Emir Ibn al-Khattab and Abu al-Walid al-Ghambi were killed before him, Basayev is considered one of many within a “prolific” Nation, the Russians and “apostates” are warned to not find happiness in his death.

Further, Council urges the Chechen Mujahideen to continue on the path of jihad, and prays: “We ask Allah to reward our martyr the highest place in paradise, bless the blood and carnage he created, and make the Ummah of Islam seek light from him.”

Shamil Basayev AKA Abu Idrese was killed July 10, 2006, in Ingushetia, when an explosive laden truck in which he was riding exploded.

The Shura Council, the same group that slaughtered American soldiers in Iraq, knows what it’s like to lose their top leader. 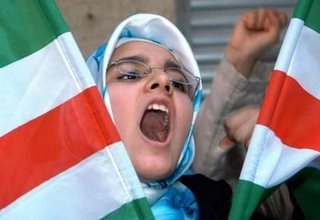