The skinheads are coming!… 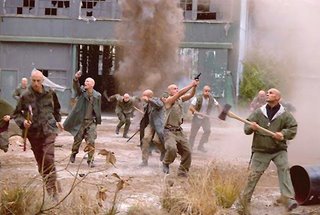 …The skinheads are coming!

…Recruiting shortfalls caused by the war in Iraq have allowed “large numbers of neo-Nazis and skinhead extremists” to infiltrate the military,… estimated that the numbers could run into the thousands.

First of all, military recruitment is up this year despite the best efforts from the Left and John Murtha. So, the New York Times ought to write a correction for that misrepresentation, alone.

And, as for the “Thousands of Skinheads” in the military.
Show us one! Just one! I’ve never seen or even met a Neo-Nazi or a Skinhead in my entire life, but I am supposed to believe there are thousands in the military?… Please!

When did the New York Times become a spinoff from the National Enquirer?

Red State shows absolutely no mercy on the Times for this trash piece.