The International Gay Pride Parade is set to take place in Jerusalem in August. 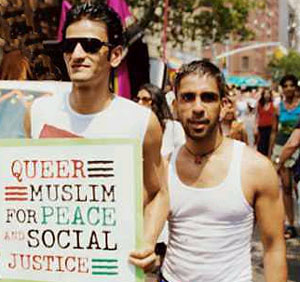 A Muslim leader in Jerusalem has threatened gays to stay away from the Temple Mount during the International Gay Pride parade next month…
But, gay activists are already making plans:

Last week a Muslim leader, sheik Ibrahim Sarsur, who is also a member of the Kensett, warned gays that “if they dare to approach the Temple Mount during the World Pride 2006 parade in Jerusalem – they will do so over our dead bodies.”

Charles Merrill, 72, a gay rights leader, stated, “I will be approaching the Temple Mount out of love and forgiveness to those who hate us. If the three major religions in the Middle East (Judaism, Christianity, and Islam) want us stoned to death as it dictates in their ancient scriptures, then our gentle innocent blood will be on their hands. Gays are the meek in society and love all of humanity.”

Merrill is one of thousands of gays participating in World Pride 2006, a gay event in the holy city of Jerusalem. The event, which is held in a different world city every four years, was to have been in Jerusalem last summer but postponed due to the Israeli pullout from the Gaza.

Merrill will be marching in Jerusalem on August 10th as a celebration of universal love, and love across borders. Merrill’s same sex partner, Kevin Boyle, will remain in the USA to carry on in the event of Merrill’s death at the hands of religious extremists.

Merrill, 72 – whose cousin, Charles Merrill, founded Merrill Lynch, and whose late wife, Evangeline, was the only daughter of Johnson & Johnson founder Robert Wood Johnson – wants other gays to join him in World Pride 2006, Jerusalem, Israel.

Freedom for Egyptians points out this parade picture… 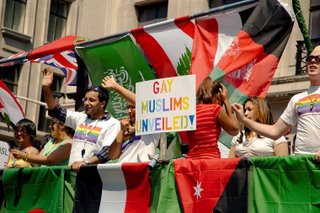 …And wonders, if they don’t want their flags in German brothel advertisements, how do you suppose these Muslim regimes feel about having their flags show up in a gay rights parade?

Jim Hoft
Jim Hoft is the founder and editor of The Gateway Pundit, one of the top conservative news outlets in America. Jim was awarded the Reed Irvine Accuracy in Media Award in 2013 and is the proud recipient of the Breitbart Award for Excellence in Online Journalism from the Americans for Prosperity Foundation in May 2016.
TRAVESTY OF JUSTICE! Durham Investigation Report Before November Election is UNLIKELY! -- DEEP STATE WINS! --Video
Gateway Pundit Talks to Jenna Ellis, the Senior Legal Trump Campaign Adviser, on the Campaign Strategy to Fight Democrat Attempts to Steal Election
EPIC! President Trump Dancing to Village People After Pennsylvania Rally is a HUGE HIT! (Video)
OH HELL NO! Joe Biden Says He Could Stay at Home During the Pandemic because Black Woman Stacked Grocery Shelf -- WTH? (VIDEO)
Massive TRUMP Crowd Chants, "Lock Him Up!" After President Trump Says Barack Obama "Knew All About the Coup!" and Then Adds that MORE Text Messages Are Coming Out! (VIDEO)
See more...