Mexican Leftist Andres Manuel Lopez Obrador lost the presidential election and the recount. Now he is calling for mass protests against the undesirable results.

This is despite that before the election Lopez Obrador said he would honor the results- VIDEO.

How sad… now he is saying the vote was rigged. 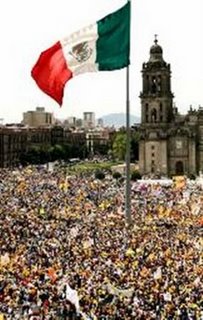 On Saturday, a mass rally was called by defeated Leftist López Obrador to protest the presidential election results in Mexico.

Mexico and much of Central and South America is split between left and right lines:

The two parties are roughly divided along the left-right lines that appear throughout Latin America today. The right supports free trade and privatization; the left opposes globalization and favors more welfare programs.

But they are not so much at odds on the country’s broad needs and goals – national pride, a rate of development that matches that of countries like Brazil and Chile, and avenues by which the poor can move upward.

One striking feature is a split along regional lines. Calderón took most of the northern states, while López Obrador dominated the central and southern states. So Mexico’s new map has its own version of America’s red state-blue state phenomenon, and it is so evenly balanced that the presidential race produced a virtual tie.

A virtual tie… except that the Leftist lost the original vote and the packaged recount. 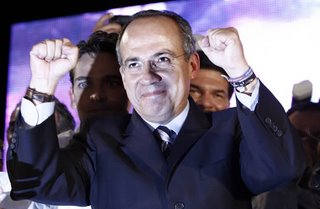 Mark in Mexico has more here and here.