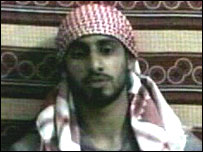 A picture from London bomber Shehzad Tanweer’s martyrdom video was released on Islamist websites just yesterday, a year after his homicide bombing. (BBC)

The video was held onto by Al Qaeda for a year and released on Islamist websites yesterday:

The release of Shehzad Tanweer’s martyrdom video is the clearest indication yet that the July 7 suicide bombers were tied into the global Islamist terrorist movement.

The film has been cleverly edited by al-Qaeda’s in-house technicians and its release was trailed on Islamist websites yesterday. The footage features a message from Ayman al-Zawahiri, al-Qaeda’s second-in-command, as well as film of people mixing explosives in a laboratory.

The media-savvy terror organisation has held onto this film for a year – finessing and re-editing – in order to gain the maximum propaganda impact by releasing it on the eve of the first anniversary of the bombings, which killed 52 Tube and bus passengers.

Tanweer seems to have recorded his video in Pakistan or Afghanistan on his last visit there with Mohammad Sidique Khan in the months before 7/7. 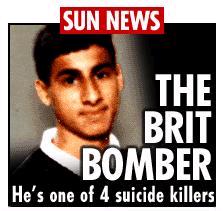 Tanweer was a British born Muslim who excelled at sports. He later attended mosque five times each day.

Tanweer was a cricket player and his relatives say he loved being British.

Tanweer refers to the non-Muslims of Britain in the tape today:

He says because they voted for a government which “continues to oppress our mothers, children, brothers and sisters in Palestine, Afghanistan, Iraq and Chechnya.”

This statement blows that Leftist argument that Iraq is the cause of all the world’s ills and that if the US would just pull out of Iraq all would be well for the Islamists. According to this new message from Al Qaeda, just about any reason will do for attacks on innocent civilians. Al Qaeda’s world vision includes much more than just the Iraq situation and they will use any excuse to justify attacks on Russia and the West.

A third person on the tape is an American, Adam Gadahn (AKA Azzam al-Amriki), who is directing Al Qaeda’s media operations! 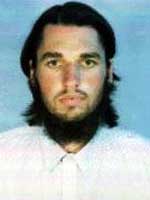 Adam Yahiye Gadahn grew up on a goat ranch in California.
Michelle Malkin wrote about Gadahn back in 2004.

AllahPundit is all over this news.
Counterterrorism Blog has been following this since the news broke.