A big Bear-Hug from OBL! 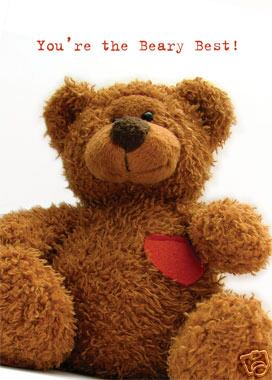 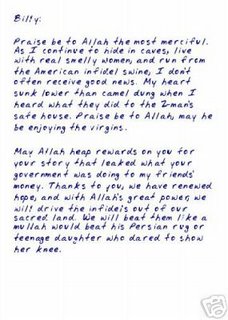 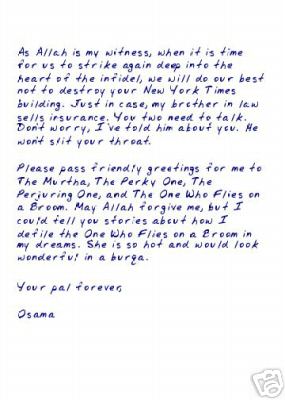 A questionable greeting card from Osama bin Laden is posted up on eBay. Here is the product description:

Note: You are bidding on a greeting card that Osama bin Laden may have just sent to New York Times editor Bill Keller, thanking him for leaking classified information. That leak of an important operation that goes after the terrorist money supply may well result in more Americans dying. Although I cannot warrant that Osama actually sent this card, knowing the track record of the treasonous activities at the New York Times, it would not be surprising. I can warrant that it is a real greeting card printed on real card stock. The Teddy Bear on the front is pretty cute. The card will be sent to the winner via first class mail.

A usually unreliable friend of mine in New York claims that he came into a contact with an interesting man, who suffers from Leber congenital amaurosis. That mystery man told my friend that he saw Keller and an unknown New York Times intern with amazing cleavage having lunch at the Tavern on the Green. They were reading a greeting card and laughing off their posteriors. The card was accidentally left on the table after lunch. When it was not claimed for 24 hours, it was given to my friend’s contact by the head waiter. When my friend obtained possession of the card from his contact, he knew I would want to have it.

This card is one of my prized possessions, and I consider it even more valuable than my Barry Bonds rookie card. It’s kind of funny. Barry had much smaller muscles then.

As long as we are on the subject of cards, there is one for which I would be willing to pay a great deal. That card is the apology card delivered for Governor Bill Clinton by an Arkansas trooper to a woman Clinton had sexually assaulted. No, it wasn’t Juanita Broaddrick. It was another victim. No, it wasn’t Eileen Wellstone, either.

The Old Gray Lady ain’t what she used to be, huh? Can you imagine if Bill Keller had been the editor during World War II? He would have let the Germans know of the date and beaches on which we would land in Normandy. He would have published the Navajo Code – in English and Japanese. He would have let Hirohito know when and from where the plane was taking off for the special delivery of Fat Man and Little Boy to his Pearl Harbor bombing imperial nation.

Bill Keller and others at the New York Times need to be prosecuted. Perhaps the Rosenberg treatment is in order. It would be a wonderful opportunity to bring back an icon of true Americana, Old Sparky. As you can tell, I do not like Fifth Columnists.

There’s also some good questions posted about the greeting card at the eBay auction site.

Michelle Malkin has much more on the dangerous blabbermouthing by the NYT.
And, David Horowitz replies to his unhinged and dangerous critics today at FronPage.