This is getting nasty…

The Far Left bloggers at Firedoglake have video of the pounding moderate Joe Lieberman is getting from the radical democrats along with those who campaign for him.

Even the very radical Barbara Boxer gets blasted for hanging with the moderate democrat, Joe Lieberman.

It’s no surprise, really… The Kos Kids are getting more vicious with their attacks on the senator. 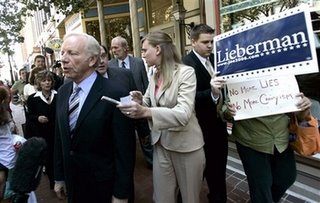 Incumbent Democratic U.S. Sen. Joseph Lieberman talks to reporters in Norwalk., Conn., Monday, July 24, 2006 during a campaign visit to the city. Behind Lieberman a campaign worker tries to block a protest sign held by Samarpana Tamm of Greewnich. U.S. Sen. Barbara Boxer, D-Cal., left background, was with Lieberman to campaign for him for the upcoming Aug. 8, 2006 Democratic primary. Lieberman is being challenged by Ned Lamont. (AP Photo/Bob Child)

Not even the moonbat senator from California could sway democrats to quit hounding the moderate Joe Lieberman.
This photo looks like it could be staged? 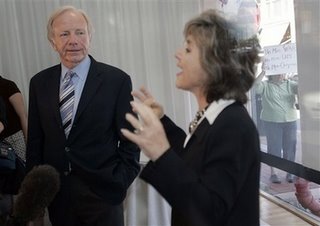 Incumbent Democratic U.S. Sen. Joseph Lieberman, D-Conn., listens as U.S. Sen. Barbara Boxer, D-Calif., speaks on his behalf in Norwalk, Conn., as protester Samarpana Tamm of Greenwich, Conn., holds a sign outside the store Lieberman and Boxer were visiting Monday, July 24, 2006. Boxer was with Lieberman to campaign for him for the upcoming Aug. 8, 2006 Democratic primary. Sign reads ‘No More War. No More Lies. No More Cronyism.’ (AP Photo/Bob Child)

Bill Clinton came to campaign for Senator Lieberman this evening in Connecticut even though his wife Hillary says she will not stand by her old pal if he does not win the primary.

Blue Crab Boulevard has more on Bubba’s appearance in Connecticut. I agree with him in that it is hard to see how the libs scored points in their gang rush of Boxer.