A Kashmiri terror group emailed a private news channel in India to take credit for the fatal blasts last week on the Mumbai trains:

A terrorist outfit claims responsibility for the serial blasts in Mumbai trains on July 11 in which some 200 people were killed and another 700 were injured.

Lashker-e-Qahar sent an e-mail to an Indian private news channel ‘Aajtak‘ on Saturday evening, claiming responsibility for Tuesday’s serial blasts in Mumbai. The outfit was associated with the Lasker-e- Tauiba, the e-mail said.

The Lashker-e-Qahar said 16 people were involved in the terrorist operation in which they triggered seven blasts in local trains.

The message, said explosions were carried out in retaliation for the incidents in Jammu and Kashmir and Gujarat. 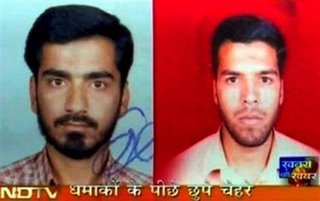 Lashker-e-Qahar says that all of the terror operatives were now safe in their places:

According to the TV channel, the e-mail message was received at 1725 hrs on Saturday claiming that the outfit was associated with the Lasker-e-Taiba.

The organisation said it was making their involvement public since all the 16 people involved in the operation were now safe in their places.

Lashker-e-Qahar, or Army of the Subduer, takes its name from Asma-ul-Husna, or 99 beautiful names of Allah. The group is responsible for setting off bomb blasts in Varanasi in Uttar Pradesh, which killed 15 people and injured over 100 back in March.