The first commercial flight in a decade departed Mogadishu’s newly reopened international airport Sunday, demonstrating how Islamic militants have pacified the once-anarchic capital and much of southern Somalia.

Local airlines had been operating from private airstrips outside the capital.

Here is a look at the “pacified” Mogadishu airport. 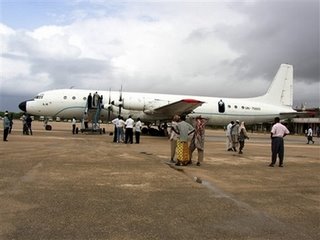 A chartered plane sits on the ground at Mogadishu airport, Sunday, July 30, 2006. The first commercial flight in more than a decade departed Mogadishu International Airport on Sunday, illustrating the complete control held by Islamic militants who have seized the capital and much of southern Somalia. ‘This is a historic flight for me,’ passenger Hawa Abdi Hussein said before boarding. ‘I think we at last gained peace and security.’ (AP Photo/Mohamed Sheikh Nor)

But, there is more to this story about the historic flights to and from the “pacified Somalian capital” this week that AP writer Mohamed Sheikh Nor forgot to mention…

Twice in one week the airport at Mogadishu, Somalia, was the scene of something almost unseen in the past decade-the landing of two large Soviet-era IL-76 cargo planes, among the biggest in the world, capable of carryng more than 50 tons in its hold. The airport is under the control of the Islamis militias that are intent on turning Somalia into an Islamic nation governed by a radical vision of what sharia law implies. Few flights have landed there at all in the past decade.

News reports from the scene said the aircraft unloaded large amounts of boxes believed to be weapons, into the waiting trucks of the Islamist militias. Little more could be garnered because the militiamen drove off onlookers and journalists.

On the first flight, the plane was painted with the “UN” markings denoting Kazakstan registration, with no other identifiers. The second flight may have been the same aircraft, and if not, was a similar Il-76, and was met by at least six trucks to facilitate the offloading of the cargo.