Someone, please explain this… 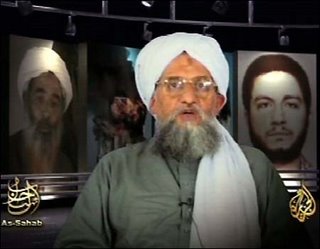 Al-Zawahiri wore a gray robe and white turban. A picture of the burning World Trade Center was on the wall behind him along with photos of two other militants. One appeared to be a bearded Mohammed Atta, the Egyptian ringleader of the Sept. 11 attacks. The other was Mohammed Atef, also known as Abu Hafs al-Masri, a former top lieutenant of bin Laden who was killed in a U.S. airstrike in Afghanistan in November 2001.

…If George Bush is supposed to be behind the toppling of the World Trade Center as several basket cases and professors from the nutroots crowd believe, why does Al Zawahiri, Al Qaeda’s #2 man, post images of the blazing twin towers in his video threats?