Iraq approved this week the transition of its second province from the Multi-National Forces to full provincial control.

The first of 18 provinces to assume complete control of security held a ceremony earlier this week.

For those of you who might be wondering, this is what winning a war and setting up a democracy looks like… and all in just three years! 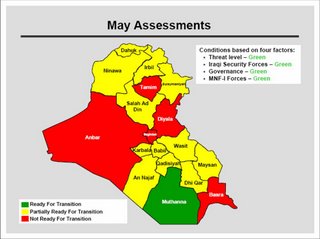 The following is a Haider Ajina translation of a headline and article from the Iraqi newspaper Aswat Aliraq from July 13, 2006:

Iraqi parliament member Hassan Alsaneed announced today Thursday, that an agreement has been reached in the Iraqi parliament. The agreement is to transition Maisan Province to full provincial control right after Muthena (Muthanna) Province (which was transitioned last week). This will soon be followed by the rest of the southern provinces. These southern provinces are to be called the “Green Provinces”.

Transition ceremonies were conducted this morning when Iraqi forces received the full responsibility of Muthena Province, from the Multi-National Forces. Ceremonies were attended by the Iraqi Prime Minister Al Maliki. Al Muthanna Province is the first Iraqi province to receive complete control of itself and to be run by its governor and its provincial legislature.

Alsaneed added that both the interior and defense ministries are preparing strong Iraqi forces with modern weaponry armor and aircraft, so they would be able to receive security responsibility in Baghdad and the western provinces.

As to what happened in today’s parliamentary session, during the session they discussed the resent escalation in terrorist activities in Baghdad and surrounding area. The defense secretary said that the recent increase in terrorist activity will be contained by the defense forces. This will be done with a new and improved operation in many stages, of which the first stage is unfolding now. 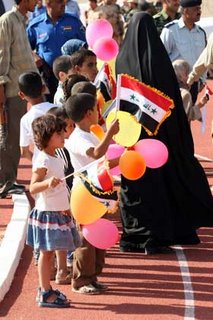 Citizens of al-Muthanna province, in southern Iraq, celebrate during a transfer of authority ceremony on Thursday. Al-Muthanna is the first of Iraq’s 18 provinces to have full control of its own security. (MNF-Iraq)

Maisan is the third province to transition security responsibility to Iraqis in as many weeks, and the second to receive full provincial authority to run its own affairs through its governor and provincial parliament. Muthanna received their full provincial control two weeks ago and had their ceremonies this AM. Dialah transitioned security responsibility to Iraqis (central government) last week.

Most news reports out of Iraq come from journalist in the Green Zone in Baghdad. Very little news comes from the other 17 provinces let alone from the peaceful provinces. Most of the escalation in violence is happening in Baghdad and the surrounding areas, while the South and the North are continuing their redevelopment, privatization, building and improving infrastructure.

The current government (the executive branch) is in full recognition of the escalation in violence and is being taken to task by the Iraqi parliament (legislative branch) to explain what the government is doing and what their plans are. This is democracy and self-rule in action.

Can any one imagine what would have happened had any Iraqi suggested holding Saddam, or any member of his family or government accountable for their actions, while the Baathist were in power? Iraq now has a national government representing all its sects, which is answerable to the Iraqi people (through the parliament).

It has been only three years since Iraqis lived under the iron fist of a brutal dictator. This dictator and his cronies are sitting in prison facing charges for their atrocities to the Iraqi people. He can no longer terrorize his neighbors, support terrorist or oppress the Iraqis. More Iraqis died from his brutality and wars every year than are being killed by terrorist activities in the last three years.